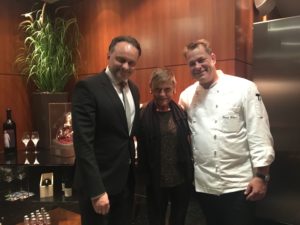 It was only a few years ago that Switzerland’s top chefs seemed to pride themselves in offering the best of the world. Now it is definitely local is best, as the gal found throughout her tour of some of the country’s luxury hotels. At Park Hyatt Zurich, Chef Frank Widmer positively beamed as he described the fish, meats and daily produce he now gets from small suppliers around the country – he certainly has the full support of his relatively new boss, GM Benno Geruschkat, who had started his own career as an apprentice chef at Hyatt Regency Cologne, under that hotel’s opening GM Fred Hürst, who was to become one of his mentors. 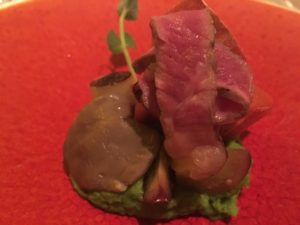 What a lovely story: when the would-be GM was 20, he won a hotel lottery to swop jobs with the GM for a day, so Benno Geruschkat hosted the daily ‘morning meeting’ and hosted a business lunch while Mr Hürst spent the day cooking in the staff canteen. Today, incidentally, Frank Widmer also beams when he says proudly he is the only manager still here, at beautiful Park Hyatt Zurich, since its opening in 2004. The all-day, inside-out restaurant, Parkhuus, is also pretty much unchanged – its name is a reminder that the six-floor building, only ten minutes’ walk from both Bahnhofstrasse, for best shopping, and the lake, had been the site of the Escherwiese Car Park. 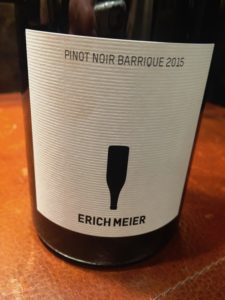 I have always loved Parkhuus for its varied menus: a big wood board supports the paper lineup of offerings, from Upfront (starters), Leafs, From The Kettle, Meat- and Fish-less, From Swiss Meadows, Fish and Crustaceans, Sides; Something Sweet. It is also admirable on listing suppliers. The superb bison that came as amuse was raised by farmer Ernst Brönnimann; I loved my beetroot tofu starter – see above – and my veal chop, which went admirably with a glass of Pinot Noir Barrique 2015 Erich Meier, who is to be congratulated on his simple wine label. I think of all the lucky locals who will be having their annual office parties here in Parkhuus – the hotel offers American Christmas Party dinners for groups from ten up to 180, all December. And then it was time for bed.

The hotel, which is 100% owned by the Pritzker family, was designed by Hirsch Bedner and Jan Clausen, and it is as classically up-to-date now as ever: the free-standing egg-shaped tub is stylishly complemented by white orchids and a big white candle – see the first video, below. Toiletries have changed – they are now Le Labo – and it was a clever touch that a bouquet of flowers had the supplier’s label attached (it shows good rapport with local vendors). So, feeling perfectly at home as always in this marvellously adaptable business-leisure luxury hotel, I got up early for a workout in the 24/7 gym, and another great Hyatt breakfast (see the second video below) and, on my way to the waiting car, I just had time to appreciate the Sol LeWitt, one of 92 amazing contemporary originals that help make Park Hyatt Zurich so special. SEE A SUITE

AND THE BREAKFAST BUFFET