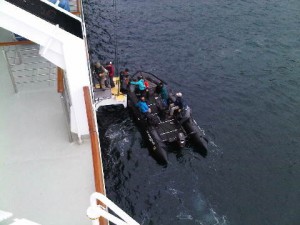 Climb down into a Zodiac…

Since the luxury Silver Explorer is an expedition ship, obviously expeditions are on the agenda, and the gal, like the other 105 passengers, is up for everything that is going on.

The first Zodiac trip was truly memorable. Put on your waterproofs.  As if packing for scout camp, everyone had been given a list of things to bring.

Waterproof top and trousers were on the essential list, with zip-close plastic bags on the desirable list for those with cameras. 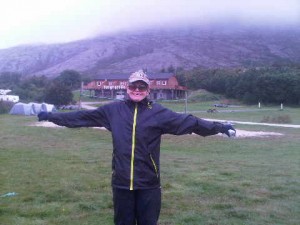 .. getting ready to start the climb up Torghatten…

We had already had Zodiac training. We learned how to put on our lifevests, with a strap between the legs.  These must be worn on top of all clothing as they inflate automatically when coming into contact with the water so if you have a jacket over you could have difficulty breathing.

After a sail of 196 nautical miles, we had dropped anchor off Torget Island.  We took Zodiacs ten minutes to land, for a dry landing, which means you do not get your feet wet.

The problem was that the rest of our bodies got wet, and the feet were soaked too.  We were going to climb through Torghatten mountain’s famous hole. 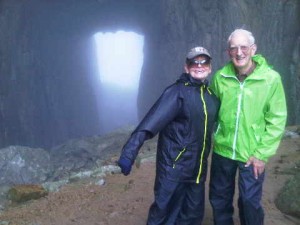 .. we made it, up to Torghatten hole.

Torghatten is a hat-shaped mountain that dominates the island. Legend has it that the troll Hestmannen was chasing a beautiful girl called Lekamøya.

He released an arrow to kill her but the troll-king of Sømna threw his hat into the arrow’s path to save her. The hat turned into a mountain, with the arrow’s ‘hole’ through it.

In reality, the hole was formed during the Scandinavian ice age, when ice and water eroded looser rocks while harder areas resisted erosion.

The hole is 60 feet high by 110 feet wide, and roughly 490 feet from one side of the mountain to the other, and rough is the operative word as even if dry it would be a hazardous climb over boulders to get through.

We clambered up one side, holding on to growing saplings, anything to help balance.  At the top, some slithered back whence they had come while others, including yours truly, went on to the unknown, through the hole and down the other side. Thank goodness everyone is fit. 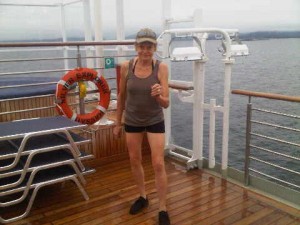 The way down was equally treacherous and it is amazing no-one twisted an ankle.  Back down at ground level, it was a case of skirting, or jogging, back round the mountain to the waiting zodiacs, and back to the ship for hot, cinnamon-spiced tea, and a shower – and something stronger.

Life on the ocean wave is certainly not boring, on a luxury cruise ship that is  Silversea.