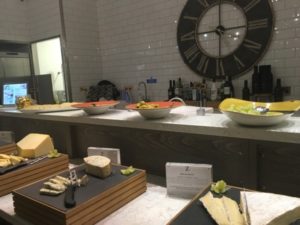 Before heading off to Debbie Flynn’s party for her friends in luxury hotels, tourism generally, and top-level media outlets, the gal was tempted to have a tasting at the really-generous nightly display at London’s Z City hotel. Yes, every evening from five to eight this ‘urbanite stay’, as it describes itself, invites all guests to a help-yourself buffet, wines, hommus, cheeses galore and more. This is considerably more generous than most standard hotels’ club cocktails, which in some cases charge for alcohol, and rarely run the offer for a full three hours. There was certainly more than enough to make dinner, and this generosity is mentioned by nearly every online review. 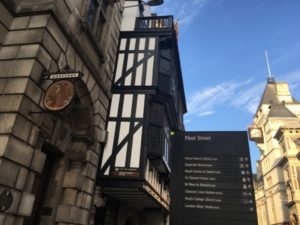 Reviewers also cite the location of this 109-room hotel, extremely handy for the Law Courts right opposite, and St Paul’s Cathedral, ten minutes’ walk east. It is right on Fleet Street – see a video below of its location. The five-floor building, in front of Temple Church, was constructed  in 1835 for a knife seller, William Lund, and later became an office office block. Now it has been skilfully converted, with minimum of colour, and absolutely nothing unnecessary. Room 508, which I reckon is best-in-house, was probably about 155 sq ft total, but it has three windows that open, a big plus. Even I was able to manage the large-screen television, which has four Sky Channels plus videos, hotel news, flight and weather updates, and the time – handy, as there is no clock. 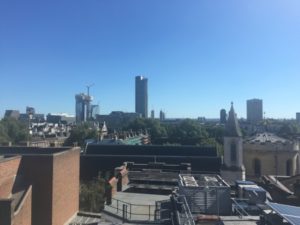 View from all three windows

To be fair, some of the online reviews are a bit exaggerated – ‘bathroom was fine’ is not what I should have said, on this visit, but next time I will take my own toiletries (a single recyclable tube that is supposed to offer both hair and body wash, with no conditioner, is not up to the requirements of my flowing tresses), and if there was kleenex I missed it, despite having opened both cupboards, which were in fact entrances for engineering help. The only omission that to me is serious, however, is the lack of a safe. Ladies, leave those tiaras at home if you are going to stay at Z City. The good points include, by the way, the price – for tonight, September 1st, 2016, room rates start at £75, which includes all the wine and snacks you can manage. 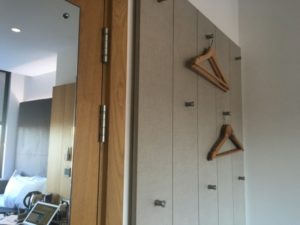 I slept well, incidentally, right by my three open windows – what a treat, in central London. And for those who like to breakfast off, say, Pure Protein Eggs with flaxseed, chia seed and spinach, perhaps with a toasted Avocado Naan with cream cheese, Sriracha sauce and Bengal pickle, and all washed down with a Berry smoothie with oats, banana, honey, avocado and almond milk, the hotel’s Zest restaurant would suit them just fine. Zest, incidentally, serves lunch but closes at five, but that is when the hotel’s help-yourself café starts. Clever. Sadly, it was Non to Naan this visit, as I had to rush to a nearby luxury hotel for a breakfast meeting.