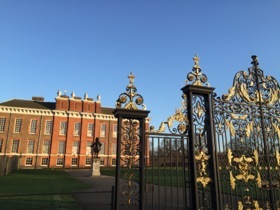 Sometimes the gal finds herself doing a quick overnight in transit between one part of the world and another. When that happens it is a good idea to find a luxury hotel that gives a sense of locale, so you know where you are, on that transit stop (and before you say anything, dear reader, this is NOT a hotel, this is Kensington Palace, London, a few yards from the Royal Garden Hotel). Of course in years to come, when Prince George is in charge, perhaps this gorgeous palace might be a hotel, but who knows…. little did Sir George Coppin, who built a simple two-floor house in the village of Kensington way back in 1605, know that in 2015 this would be the official London home of Prince G and his parents, the Duke and Duchess of Cambridge, as well as assorted lesser members of the enormous Royal Family. 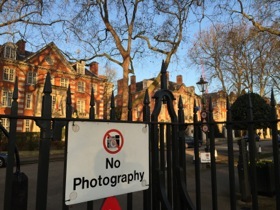 You can tour some public rooms of Kensington Palace, and wander in some of its grounds – note the double-lifesize stone statue of a seated Queen Victoria to its east. I actually love running in the extended grounds, Kensington Gardens, which join, to the east, Hyde Park. Head the other way, to the west, and you come to the semi-private Palace Green, running north from High Street Kensington to Bayswater. Look at some of the houses in Palace Green. Lakshmi Mittal has a whole one. If you want to buy the leasehold on a single apartment, last recorded price on Rightmove is £3.8 million.. It is staggering that Malaysia’s embassy can justify being here, for the ambassador to live the appropriate equivalent of the life of Riley. 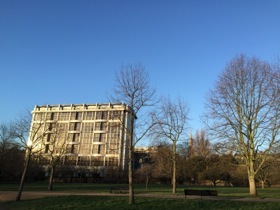 But then Lebanon, Nepal and Romania, plus the Russian Federation, all have massive houses here, and Malaysia, at least, does not want you to take any photographs. So be it. I continued on round Kensington Gardens and preferred to look at the striking simplicity of the Royal Garden Hotel. It was built 1965 as a boring block but new owners, the Singapore-based Goodwood group, in 1996 added its current sculpted-like exterior. Inside are 394 rooms, and of course those facing east, over Kensington Gardens, are prime (I loved 436, for its views, and its thoughtfully heated bathroom floor and electric towel rail). 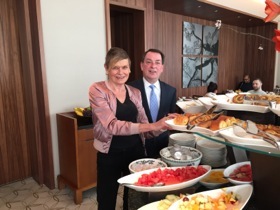 This is a luxury hotel that not surprisingly gets a lot of embassy business, plus sports teams and the entertainment world’s support groups – think nice bands rather than temperamental star singers. They love Bertie’s Bar, in the evenings, and the rooftop Min Jiang restaurant, and day-long, Park Terrace, for its Kensington Garden views and superb and healthy breakfast buffet. At weekends leisure guests flood in, for the luxury hotel’s superb location (Kensington High Street underground/tube, lots of buses, proximity to High Street Kensington retail and the Albert Hall) – and kids can borrow, for free, scooters to take into Kensington Gardens, immediately outside. Who knows, in a few months little Prince G might be scooting around, too.