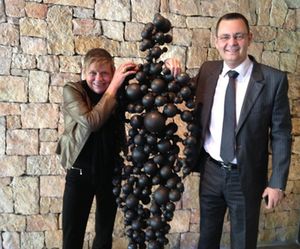 Gilles Fouilleroux is the guy who runs the luxury resort that is Terre Blanche Hotel Spa Golf Resort near Fayence, handy for Cannes and under an hour from Nice airport.  This means, says the gal, that at big Cannes events, like the film festival, the duty-free show and many other annual business conventions, his 115-room hotel is booked solid, as it is for major golf tournaments.  And summer-long, discerning families descend for the peace and safety of this family-friendly place, its entire 750-acre space bordered by a six-foot fence with CCTVs along the whole length. 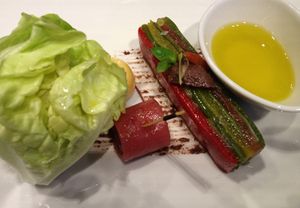 You can dine in the golf club house, or in your villa (they are called suites but I think of them as villas, with terracotta tiles on floors and roofs, and stunning views). You can opt for the Faventia dinner-only restaurant, which has two Michelin stars and Riedel glasses. Or you can, as I did, choose the more-casual conviviality of the Gaudina Bar-Lounge.  First, sit up at the bar, for a glass of rosé, say from Ch de Selves, only 20 minutes away. Then go local, have a Niçoise salad – but what a surprise!  It is deconstructed.  It makes you smile. 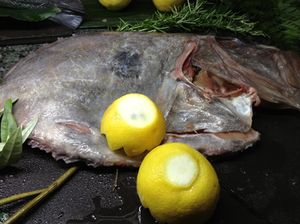 Think of the typical Niçoise, with chunks of anchovy and hard-boiled egg and lettuce.  You have it all here but it is, well, different.  The bibb lettuce sits next to a half unrolled roll, of tuna rolled with egg white – on its end is a medium-cooked egg yolk.  The vegetable block by its side is topped with anchovy paste.  Pour over as much of the lemon-flavoured olive oil as you like.  Meanwhile, the fish we had chosen was being cooked.  Bangkok does fish markets beautifully – choose your fish and it is cooked to order.  The same thing happens here. Our John Dory looked just right for two people. 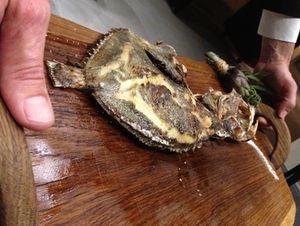 .. after cooking, it is presented …

John Dory, also known as Peter’s Fish or St Pierre, but why John Dory? It has a somewhat yellow body with a black spot to frighten predators. Some think the John comes from jaune, the French for yellow.  Others think it is from janitore, or door-keeper, which would be St Peter, who is thought to have brought Jesus this particular fish.  It can grow to two feet, and it is a poor swimmer, which must make its life pretty difficult.  It has to keep out of the way of sharks.  It, in turn, also likes fish, but smaller fry such as sardines. 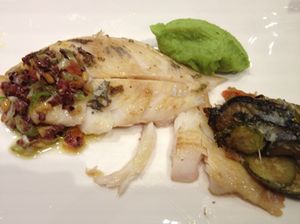 .. and then served, plated

Our fish has been carried, on a wood board, for presentation, and then it is deftly portioned, with fork and spoon, and served with two small cast-iron cocottes each, one with basil-mash, the other with aubergine and other Mediterranean vegetables.  By now we have progressed on to red wine, also Ch Selves. This is a large airy room, looking on to the terrace that, during summer, becomes the outdoor part of the restaurant. Tonight, we are all, about 60 of us, inside but there is so much space and the acoustics are such we cannot hear anyone else’s conversation. A couple of little kids, one in a delightful Alice-in-Wonderland dress, run around, but are no nuisance to anyone. One of the managers bends down and draws her something, on a pad of paper. 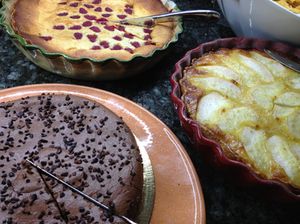 In the morning no-one else is up by the time we arrive, back in Gaudina, for breakfast (we have an early flight).  If a sign of a true luxury hotel is a great breakfast, this place is LUXURY, all capitals.  Four serving tables have been wheeled in, offering every fruit and cold cut and cheese (and two kinds of fromage blanc, both from Ceneri in Cannes) that you can think of. The breads and croissants are all made here, said a passionate young waiter whose mother must be beaming with pride. There are even the tarts and cakes, including a chocolate gateau, that some French love to start the day with.  Yes, after this week-long trip, I say Vive La France, especially the new-style food and service in this ‘new Provence’ area.