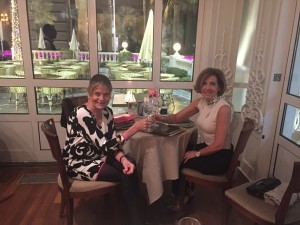 Angela Brav at The Carlton

At the beginning of ILTM’s global event in Cannes, November 30 to December 3rd, 2015, the Carlton InterContinental shone as a real film star. This is an amazing hotel, built in 1912 for the royalty of Europe, including the Tsar and his family, who used to winter in the South of France. Thinking of this hotel reminds the gal of its contemporary, Grand Villa Igiea Palermo, a one-time sanatorium turned into a hotel (at one point Hilton), and a popular winter resort for crowned heads who sailed across to Sicily for its fine air and food, and to network with their extended families who ruled other countries in Europe before World War I. Anyway, before ILTM started in all earnest, there was time for a quick dinner-for-two with Angela Brav, the would-be pianist who brilliantly presides over all IHG‘s brands for the whole of Europe. 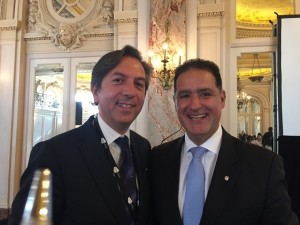 The Carlton continued to star Monday, and Tuesday, when it was the location for the annual InterContinental lunch. On this occasion the host was Didier Boidin, the one-time bonsai-lover who left his miniature trees behind when he moved back to Paris to oversee IHG‘s luxury and boutique brands – InterContinental and Indigo. He had several InterCon GMs with him, including Giuseppe Vincelli, who runs both the newly-flagged InterContinental Lisbon – it opened as Le Méridien and went on to be Tiara – and, not too far away, the boutique InterContinental Estoril. Alvaro Rey, lively boss of InterContinental London Park Lane, was just about able to make the lunch before flying, somehow, from Nice to Mexico City to meet a chef. He had to leave, sadly, before InterContinental Bordeaux, the Jacques Garcia-designed Grand Hotel Bordeaux that owner Michel Ohayon is handing to IHG to manage, this very week, gave out very-welcome packs of delicious Siberian sturgeon caviar as take-home gifts. 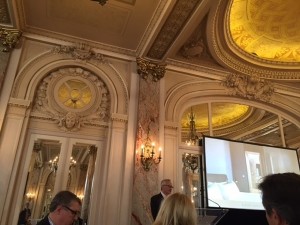 We had already eaten foie gras with chestnut shavings, and lamb Bordeaux style, with boletus, carrots and cress. We were simultaneously being educated, of course. Watching any sales presentation in such a glorious room as the Carlton‘s Le Côte makes the experience even more meaningful. Parisien Nicolas Papamiltiades is main designer of this Rococo beauty, with its gilding and frescoes, and yes, a screen does look a bit out of place. Hervé Houdré, who runs another beauty, InterContinental New York The Barclay, flew over to describe the re-opening, on May 1st, 2016, of his 704-room hotel: it will have New York‘s biggest suite, a two-bedroom, 3,000 sq ft-total Penthouse, which comes with an additional 1,500 sq ft of terrace (and, says Mr H, expect an amazing hotel bar with the supreme collection not only of gins but also of tonics). 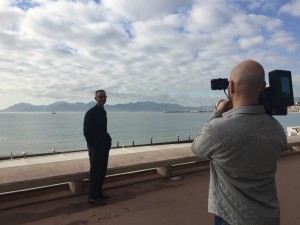 And then, feeling like a star myself – though I guess real film stars do not carry their own caviar – I walked yet again along the Croisette, east to the Martinez to drop off said caviar and then west, back past the other signature luxury hotels, J.W. Marriott (at one point Hilton) and the better-all-the-time Majestic Barrière. Along the way I saw another movie being shot, starring Sonu Shivdasani, who is so excited about his third hotel, Sonevajani, opening shortly in the Maldives.