Where else in the world can you walk into at least part of the Presidential Palace, asks the gal during her stay in Quito? Ecuador’s President, Rafael Correa, does not mind. Leave your luxury hotel, say Swissôtel Quito, for a guided tour, with a stop-off here. You might well be surrounded by teenagers from Caracas. From Venezuela? What are they doing here?  They can bring credit cards, cash the maximum allowed and get US dollars, the currency of Ecuador. The cunning young Venezuelans then return home, to a devastated nation with inflation running over 60 percent, and exchange their dollars for much more than the official rate. Some of the tours run specific itineraries, namely Bulevar Naciones Unidas, Jardin Botánico, Le Mariscal, El Ejido, Centro de Arte Contemporáneo, La Basilica, La Compa~ia, El Panecilli, Bulevar 24 de Mayo, Plaza Grande, Parque García Moreno and Teleférico Av Occidental. 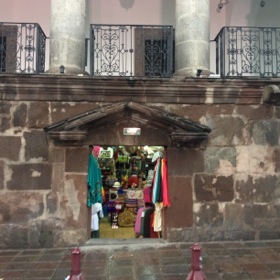 Shops are set into the lowest floor of major buildings…

Through shortage of time, I concentrated on the Old Town, and loved the way small shops are slotted in ‘holes in the wall’ of ground floor levels of famous buildings. They are in incongruous order. A barber may be next to a shoe shop, a woman’s blouse shop next to a florist. Of course there is a florist. This is a nation of flowers, as well as of such edibles as bananas, mango and papaya, and chocolate and coffee – they produce for Starbuck’s Reserve, here. Cuenca, a lesser but still important inland city, produces superb massage oils and toiletries (is this one reason, I wonder, why there are growing numbers of foreigners, especially from North America, who retire to Cuenca?). 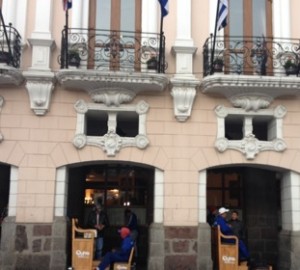 ..and even into the lowest floor of the Hotel Plaza Grande

Shops also line the lowest level of Hotel Plaza Grande, at one corner of Independence Square. Judging by its five, rather than the usual two, floors, this was one really important house in the past. It is known to have belonged to explorer Francisco Pizarro in the 16th century. It became Quito’s first luxury hotel just over a century ago. Now it is owned and managed by the owners of Swissôtel Quito – yes, the multi-talented and poly-tasking Gino Casagrande is also GM of this 15-room hotel. Inside, it is exquisite, with polished wood floors and antiques, and instead of the commonplace notepad and pencil you get a box with rolled papers, and real quill pen and ink. 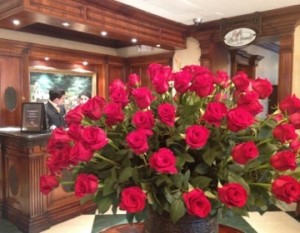 More red roses, in the lobby of Hotel Plaza Grande

Beds have regal head-curtains flowing down from wall-set crowns. The restaurant, like the First Class dining room of a stately ocean liner in its golden days, has a polished wood floor, and four-foot high multi-light candelabra on the burgundy tablecloths – you also have the option of eating in any of the restaurants at the sibling luxury hotel, Swissôtel Quito. Oh, and by the way, the lobby of Hotel Plaza Grande of course has that Ecuadorian requirement, a display of fresh roses in the main lobby.