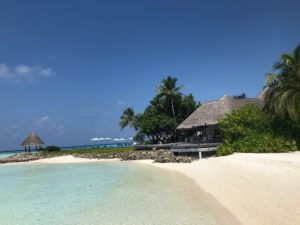 Looking along a beach

The gal has already mentioned a Maldives norm, how people line up to wave you in, on arrival, and to wave you out, on departure. At the luxury Four Seasons Resort Maldives at Kuda Huraa, however, they unfurl a flag as you sail away (this resort is one of the few close enough to Male to be able to transfer guests direct, with no need for the day-time only float planes – a distinct advantage for short-stay guests who can save at least half a day on arrival and departure). Kuda Huraa is one of the most venerable resorts. It opened in 1997 and was briefly Kuda Huraa Reef Resort before being bought by B.S. Ong and given the Four Seasons treatment. 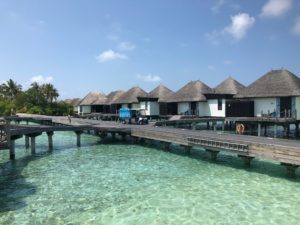 It is a rarity, too, in being only about 20 yards from neighbouring Bodu Huraa sland, a local island which means it is a proper village, without resorts. This means that many of the 395 employees live there, to be shuttled across to work. It also allows guests at the 96-villa resort can take 90-minute village tours, and interact with the locals. Of the villas, by the way, many are over-water, a particular favourite of Asian guests who will often shun a destination if there is nothing ‘over water’ – it does mean, however, that there are no guest bikes, for safety reasons. But this is the resort for water, whether living over it, or swimming and diving in it, or surfing on it, or seriously studying marine biology. 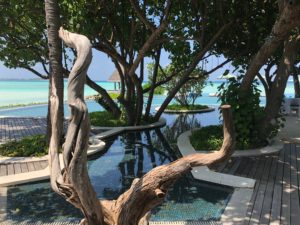 Using Four Seasons’ 11-cabin Island Explorer to house some participants, the hotel hosts the annual Surfing Champions Trophy – current trophy holder, who took home a $10,000 prize, is Taj Burrow, an Australian who actually professionally retired in 2016. Year-round, too, there is a sibling marine biology centre at Four Seasons Resort Maldives at Landaa Giraavaru, 60 miles to the northwest, but this is the mother-ship centre. Its head biologist, based here but on a frequent shuttle between the two places, says she has no challenges recruiting her 20-total team: well, what marine biology grad would say no to coming to work here in marvellous Maldives? 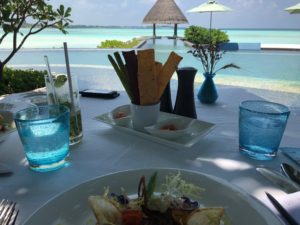 I lunched with Tobias Emmer, from Munich, who certainly did not hesitate when asked to move on from over a decade at city-centre hotels – lastly, at Mandarin Oriental Shanghai – to come to this idyllic island vacation resort. Yes, there are many differences. He works longer hours, and even his one day off per week sometimes ‘disappears’ into thin air. But he is having so much fun, and there is more time to get to know guests, who stay much longer, typically at least seven nights. And unlike back in cities, there is nowhere for hotel guests to escape, unless they want to tour the neighbouring-island village. NOW TOUR A BIT OF THE RESORT, AND SEE A VILLA