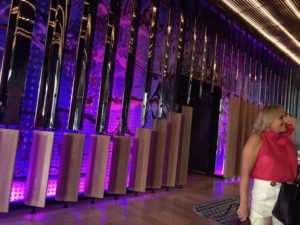 Colour in the lobby

One thing needs to be pointed about Kuala Lumpur.  All three of its new luxury hotels are within a few minutes’ walk of the Twin Towers and adjacent KLCC park. The next thing to remember is that this city has grown out of all recognition. Only a few years ago you could, and did, easily walk around all the central areas. Now the authorities have made it well nigh impossible to walk at street level: there are just about enough overhead walkways but if you are not exactly au fait with the city’s geography you might, as the gal did, end up in a shopping mall rather than back in a street. The moral?  If you are staying a hotel stay put, and enjoy simply being there, particularly if it has a lobby as colourful as that of W Kuala Lumpur. 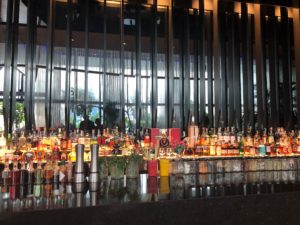 And as is company standard, there is a multi-colour Woobar. This 150-room hotel opened August 2018, a full seven years after the contract was signed. It is owned by Tan Sri Dato’ Tan Chee Sing, whose sons apparently are fervent enthusiasts of the W hotels they know in Hong Kong and Taipei.  For this hotel, the owners chose Australian designer Nic Graham, who had actually done W Hong Kong, as well as W Brisbane, and Indigo Taipei. In Hong Kong, he had a 76th floor rooftop pool to play with.  Here, at W Kuala Lumpur, the Wet Deck, as it is called, is magnet for many guests and local visitors – the day I called by for lunch with the GM, Christian Metzner (above, by the pool) a coterie of ladies belonging to the Malaysia-South American Association, or similar, were having lunch, and a hilarious time taking poolside selfies. 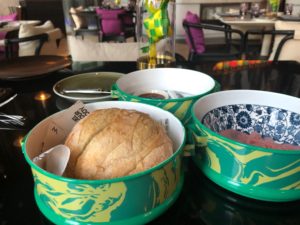 Another pool, a 10-metre private pool, goes with the 520 sq m Extreme Wow Suite.  Not surprisingly it was booked when I was there, so I need to go back to see it.  I also need, or rather want, to return to eat here. The hotel’s Culinary Director, Richard Millar, is from Melbourne and he is passionate about farm to table.  He has cultivated a female farmer in the Cameron Highlands who grows about 30 items exclusively for the hotel: they are picked the previous night, placed in a truck to leave at four a.m., for arrival at the hotel at 10 a.m.  Millar works with another farm growing his herbs, and he has close relations with a chicken farm, and a cheese maker right here in Kuala Lumpur.  About 50% of the hotel’s produce is thus this fresh. Yes, costs are slightly higher but the flavour and freshness are incomparable, say both culinarian and GM.  And customers love it. 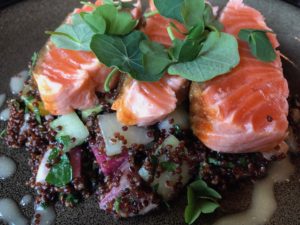 Salmon atop a healthy salad

The W brand has always been about partying but now, says Christian Metzner, it stresses fuel – for which read ‘good food’ – and fashion. It could also extend to favourite.  As with all W hotels, this luxury place has W Insiders, or concierges.  The hotel has deliberately chosen two switched-on females. One is a practising musician, who knows all about the best concerts in town. The other is more into fashion, and sounds like a walking encyclopedia when it comes to openings and sales, and between them they even seem to be able to identify the best graffiti and more. But, as I said earlier, it might just make sense not to go anywhere, just stay put inside this fun luxury hotel.