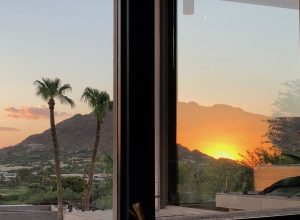 Looking out, at dinner

And now for another slice of Arizona heritage. What was once John Gardiner’s Tennis Ranch, a hang-out for such notables as Barry Goldwater, is today the tip-top in the Paradise Valley area, The Sanctuary on Camelback Mountain Resort and Spa, a Preferred hotel (you will be lucky to get a room, or rather a casita, here; the rooms and all the facilities are booked solid, it seems, with local A-listers and cognoscenti from far and wide). When the gal arrived early evening, she looked down at one of the pools, above, to see what looked like an art work. The overall brand colour of this luxury resort, run by Westroc, is lime green, which goes so well with desert hues, and with the sunset. 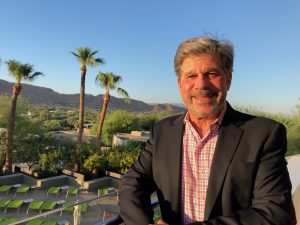 What is immediately obvious is how passionate all the staff are. With 105 casitas spread out over a considerable part of the 53-acre estate, and with most of those casitas reached by stone steps, sometimes blocks of stone, from any road, it is not surprising that there are 400 working here. Housekeeping, for instance, has an Ironman task, carrying everything from trolleys parked on roadways and back again – I was in Amethyst which was 12 steps up from the pathway and, once inside the one-room suite, two steps down to the bedroom area and another two steps down to the living area. Think of room service, as well, and add in scorching August temperatures that soar to 115 degrees. But despite all this, one half of Westroc, Bill Nassikas, told me with pride that at least 200 of the team have been here at least five years. 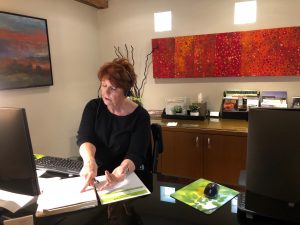 This is obviously because the resort is such a success, and the team spirit is led by perennially young VP and GM Mike Surguine, part of the inner-core team since 2001.  Another person who must be singled out is concierge Rebecca Rorabough, who has the patience of Job. She took my Microsoft Office challenge home overnight, to sleep on it, and the following day I waited while she never flinched as some guy took forever calling in to pre-order a bottle of champagne for his arrival tomorrow. And then, when it comes to food, the reason so many Arizona gourmets head here, Johnson & Wales grad Beau McMillan knows what his regulars like, say Big Eye tuna tartare followed by Korean barbeque short ribs with kimchi brussels sprouts, coconut forbidden rice – and Bill Nassikas approved of the sommelier’s choice, Pinot Noir 2017 Derange by The Prisoner Wine Co in Saint Helena. 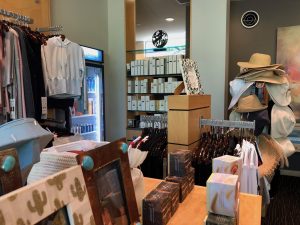 Sadly I just missed the finals, at The Sanctuary, of an area-wide Hotels v Bars mixology competition, which included drinks specialists from Michael Testa, from here, and Robert Porter, from The Phoenician. I would also love to be back April 2020 for the Nirvana food and wine festival, which Forbes says is one of the best in the USA: over four days there are 16 events for up to 500 people a time, with such enticing themes as ‘wood, wine & wagyu’. And when I do come back to this gorgeous resort I shall ask Rebecca to reserve me an appointment for one of the most skilled and thorough manicure massages I remember (cleverly, on arrival you go to the spa, to be tempted by the treatments menu, and you are then escorted via the boutique, full of absolutely irresistible collectables). I could easily, yet again, have Beau McMillan’s salmon bento box lunch, though I am not sure I could cope with his ‘Elementhal breakfast’ dish, namely fried brown rice, char siu pork, shiitake mushrooms, sunny side up egg, honey and sriracha, which apparently is a hot sauce of chili peppers, distilled vinegar, garlic, sugar and salt. That having been said, The Sanctuary operation is very clever, and next time I want to climb some of Camelback. SEE MY CASITA IN SUMMER – AND THEN WITH THE FIRE LIT