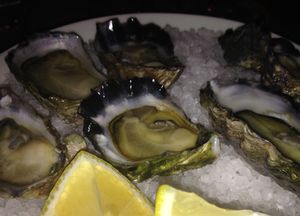 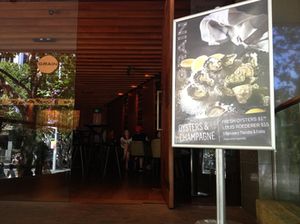 Outside Grain, looking in

Ah, last time I was here Four Seasons Hotel Sydney had a big meeting room on its ground floor.  Now, thanks to designer Michael McCann of Dreamtime Australia Design, that space is a large bar.  A welcoming door right on George Street even advertises oysters, so this is the place.   It is an amazing bar – reminds me somewhat of the polo-themed bar in Four Seasons Hotel Buenos Aires, which is where I was exactly a year ago, before getting on a cruise ship.  Same today, here in Sydney.  Cruising this afternoon, somewhere else tomorrow…. 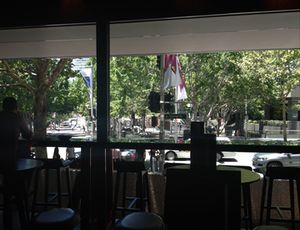 Inside Grain, looking out

Grain bar allows you to sit up at the counters along the wall facing George Street and, if the winds allow, the big windows can be opened. In the centre of the room is a two-way bar with bottles going ceiling high.  Drink the special beer, a Grain lager brewed by The Rocks micro brewery. If you do not want oysters, go for a mini-Wagyu burger, cheese included, a mere A$9. This is value eating, in a great environment.  The hotel is now Korean owned and I wonder, perhaps mischievously, if kimche will be added as an optional condiment – good, there is going to be a Four Seasons Hotel Seoul, same owners as this one. 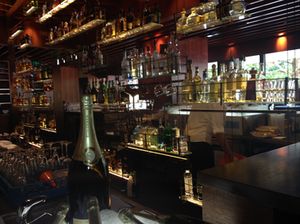 Michael McCann has also turned the hotel’s former rear-lobby bar and the GM’s office, which was behind the scenes, into a marvellous all-day restaurant, the seating areas in the C that wraps around a big open kitchen. This is The Woods, and stacks of wood, ready for the pizza oven, form part of the decoration.  The cornice around the outside of the kitchen is a back-lit mélange of wrought iron words, all associated with food. Deliberately graffiti-like black-paint words are scattered over the white ceiling.  You are dining and suddenly you look up, and see what is written overhead. 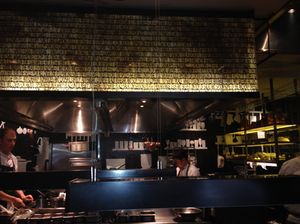 Open kitchen at The Woods

One of the corner walls is a living wall of large herb displays.  I think of Palais Hansen Kempinski Vienna, with its living walls right next to you as you dine.  Once again, here I get a feeling of dining outside while I am in.  It helps with a subliminal feeling of freshness that goes well with foods that are local, organic and, of course, fresh.  A group of Asian ladies is celebrating a birthday. The hotel GM, at another table, is describing the management act at tonight’s staff party.  Our server bemoans the fact she will not be at that party as she has to work. 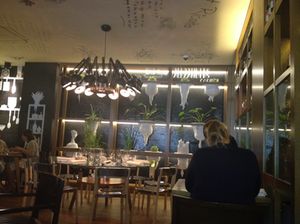 One dining corner has a wall of living herb pots

This was the supreme luxury hotel when it opened, as The Regent Sydney, in 1982. By turning its long-standing restaurant, Kables, into meeting rooms, and presumably by finding another spot for the GM to make into his office, and by creating such a fabulous bar, and an equally sensational restaurant, this hotel is back up in the upper echelons of lifestyle.  I am genuinely sorry to leave, but the ship will not wait.