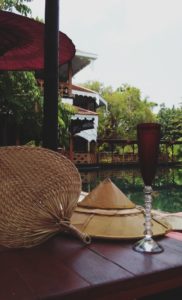 Oasis perfection, thanks to Belmond

After a busy week in Bangkok and its luxury hotels, the Sybaritic Single retired to Myanmar for a few days at Belmond Governor’s Residence.

Arriving late, the Sybaritic Single was first sceptical when he was greeted in an open-air reception, rather warm and humid at this time of the year. His concerns grew as he heard antique gong chimes welcoming him as he walked towards main building of the hotel. Three days in humidity with someone hitting the gong as soon as the Sybaritic Single moved, seemed a rather questionable pleasure.
However, he once again felt comfortable as soon as he reached his room: the AC was set to his favourite “Moscow winter” regime, the WiFi was fast and covered all areas of the hotel, including gardens and lotus ponds, and the four-poster handcarved teak bed did not make a single sound. There was even a salon-grade hairdryer thoughtfully waiting in a woven basket.
Skipping breakfast, the next morning Sybaritic Single decided to dive into the hotel’s tropical pool. On his way, he was warmly welcomed, by name yet with utmost discretion, by every member of the team he met on his way, including General Manager, Eddie Teh, who found his newest guest as he was exploring the restaurant’s organic herb garden wearing a Burmese cane hat – a thoughtful poolside amenity. Looking after the hotel as well as Belmond’s two river cruises in Myanmar, Eddie is committed to surpassing every expectation of his discerning clientele.
The colonial appeal of one of the oldest residences in Yangon, built in 1920s, is kept in pristine condition. Despite this, Eddie shared his plans of further upgrading the boutique hotel to match the latest word in luxury. However, the refurbishment will only bring the product into line with the highest standard of very personal and exceptionally polished service, already instilled throughout the property. This luxury hotel is a great example of how one mixes century-old traditions, colonial antiques and modern conveniences, does it all in an exotic location – and gets it totally right.