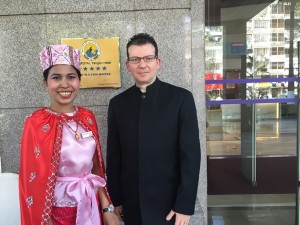 The woman standing by Jean-Marc Poli gives the game away – the gal has, after nine years, returned to Myanmar. Poli is GM of PARKroyal Yangon, and the woman wears one of many national dresses. This is the first visit to this luxury hotel as it is now, but then it has gone through many metamorphoses. It opened at the end of the last century as Equatorial, switched in 2001 to Sofitel, was rebranded the following year as Grand Plaza PARKroyal Yangon and finally, a decade ago, to its present name. This is a central-city, efficient business hotel which also knows how to make tourists feel at home. A charming and useful Dos and Don’ts booklet says DO smile, DO tuck away your feet. 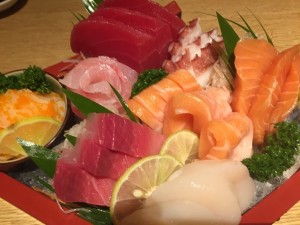 At the same time DON’T point with your foot and DON’T touch anyone on the head and DON’T disturb people praying or meditating. It is also essential to observe dress codes, not too much flesh showing and no short skirts or shorts, when visiting religious sites. Fortunately there are no codes on restaurant-visiting. We lunched in the hotel’s Shiki-tei Japanese restaurant, designed by the Tokyo firm KKS (Kanko Kikaku Sekkeisha). Dividing walls between tables are formed of a vertical chess board of typical Japanese tea-boxes, as shown in the big picture. We must start with sashimi matsu, we are told, as apart from the salmon, which is flown in from Norway, everything is fresh, from Myanmar. I wonder if the salmon is part of the ‘contribution’ the Government of Norway promised, back in 2013, to help put Myanmar‘s incoming tourism back on the map? 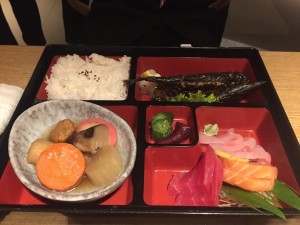 Jean-Marc Poli, whose French father and Italian mother were living in Dakar when he was born, is a man of the world, in the business of hotels – please note he is not in ‘the hotel business‘. He believes success comes from knowing how much business you did last month, how much you are doing this month and how you are going to finish the year. 2015 started well for Yangon, with incoming investment and masses of tourists, but then April floods and the election slowed things. He told me about his local employees. New hirings are helped to open a bank account, and women get three months’ maternity leave, with their positions guaranteed. Everyone around seemed to be smiling, which is a national trait – remember that booklet, DO SMILE. At the eighth floor Orchid Club lounge, the man on duty painstakingly helped with a software hiccup, smiling the whole time (it is well worth buying into an Orchid Club room as perks include two items of laundry, every day). 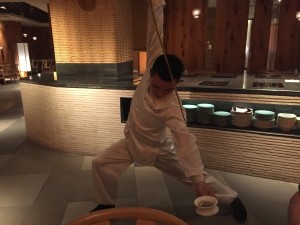 I take away a bar of Shwebo Minthamee Thanakha face paste, which I must blend with a little water and put on to ward off UV rays, plus acne and pimples. There are lots of memories of this friendly luxury hotel. As could be expected in a land that produces something like 60% of the world’s teak, there is carved wood everywhere, and panels by the ground floor elevators and behind front desk have precious jewels inset (jade is another national export, together with seafood, oil and gas). Our Shiki-tei lunch finished with Eight Treasure Tea, brought over from the hotel’s Si Chuan Dou Hua restaurant. Yes, there are eight ingredients, namely red dates, wolfberries, dried longans, chrysanthemum, rock sugar, dried lily buds, jasmine leaves and walnut, all of which reduce cholesterol, help blood circulation and immunity, apparently. The tea master whirled his long-spouted tea-kettle back and forth and round and round and then, like a professional dart player, landed the boiling water exactly in the cup. Brilliant, and memorable.