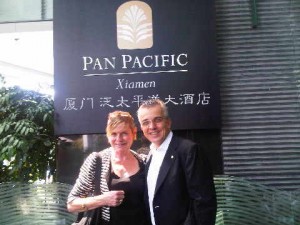 Xiamen, which means ‘mansion gate’, will be the next Singapore, promises the city mayor.  Five years ago his predecessor said soon you will be drinking the tap water here, no need for bottled water.

Sure enough, within a few hours of arriving in this burgeoning Chinese city, that is what the gal did.  But first things first.  Fly in to Xiamen airport and you think you are right in the centre of this city.  No problem, a new airport is planned, to allow the city to grow, or rather the island to be even more productive. 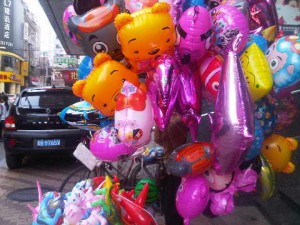 Balloons are out in blown-up force during Golden Week

And yes, Xiamen is an island, 389,230 acres in all, joined to the mainland of Fujian Province by the half-mile long Haicang suspension bridge.   The island itself is neatly laid out, with wide streets, many flanked by green trees.  There are lots of parks and wooded hills.  Some areas are still old houses: others are soaring modern blocks.

The Pan Pacific Xiamen, for instance, is 29 floors high – conveniently next to the seat of the city government, this is the top luxury hotel for visiting CEOs.  They come to Xiamen to talk trade, and fishing, and sunglasses (this is the capital of the world when it comes to producing luxury eyewear for big retail brands).

The knowledgeable also come to St Gregory Spa in the Pan Pacific, for a 60-minute muscle-rolling Tui Na Chinese body massage that is the ideal anti-jet lag therapy. 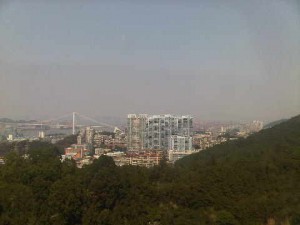 Without doubt the 387-room hotel is best base for serious negotiations.  After all your talking, come back here to relax. Choose a room facing Haicang Bridge and, just to your right, the peaceful Huweishan Park – it is only five minutes’ walk to its entrance, and then you can do anything up to a 20 minutes’ run up to its summit, passing tai chi groups and people in uniform exactly and minutely brushing even one fallen flower petal into their garbage pails.

Immaculately clean is the order of the day.  Thinking of this as a business base, by the way, I recommend a Grand Club room, for access to the 28th floor Club, with lovely staff and masses of smoked salmon on the breakfast buffet. 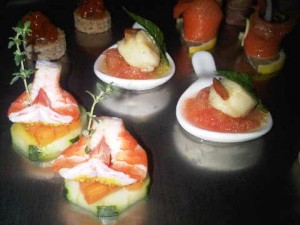 I would also dine at Caesar on 3, sitting outside on the wood deck (locals prefer the air- conditioned inside): at our dinner, we paired smoked salmon swirls followed by lightly-grilled salmon with spinach and fries with a Geoff Merrill McLaren Vale Shiraz 2006.

Two things to say here.  First I can never get enough salmon and, secondly, Geoff Merrill is such a good friend of the hotel GM, John Kockan, that he will personally be at the launch of the hotel’s new Marble steakhouse on October 24th. 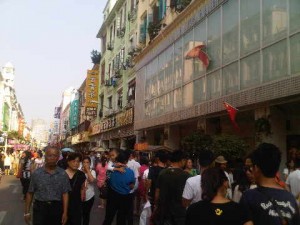 Yes, salmon is good for you and so is working out.  The hotel has a light and airy gym, open from 0630: it looks out over the outdoor pool, preferable for adults early morning as, as so often happens in China, kids love frolicking as the day rolls on. I personally love a daybreak run up that hill.

And at all times, if there are breaks in the work programme, head for the city’s famous Zhongshan Lu pedestrian street, 20 minutes by taxi from the hotel.  Right now it is Golden Week, the national holiday when all of China is celebrating. Zhongshan Lu is the ideal venue to see it at its best.

The permanent shops include Carrefour, IWC and Zegna, and so many Starbucks you begin to think that Xiamen is synonymous not only with salmon but coffee – and money. 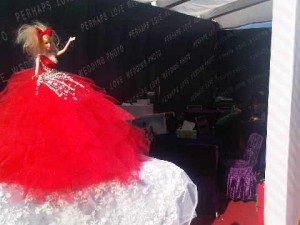 This is a rich city.  One 38-year old keeps his Lamborghinis (note the plural) in the carpark of the Pan Pacific hotel because he does not want them towed away if he parked them in the street.   Well seriously, anyone who can afford two of the beauties can also afford the $1,738, each, that it costs to park – per month.

At street level, money is also being dished out as if there were no tomorrow during this Golden Week.  All along Zhongshan Lu are temporary stands.  A couple are selling wedding photos, or rather they are enticing brides-to-be to use this particular wedding photographer.  One such stand is labelled Perhaps Love Wedding Photo.  Right next to this are displays of colourful balloons. 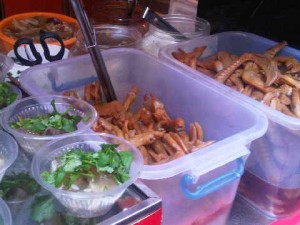 Food is what makes it, however.  The healthiest-looking stall is named NZ Natural, and displaying fruit skewers.  Unfortunately these are then caramelized, resulting in sugary toffee-apple things.  Another stall is offering walnut-sized balls of sticky rice rolled in your choice of sugar or nuts.

How about burgers, China style?  Round cook pans hold seven patty-sized oiled cups. Into each of these, pancake dough is poured, with bits of sausage and ground meat and onions on top.  At the exact moment, a ‘cook’ turns each, to cook the other way up.  Lovely. 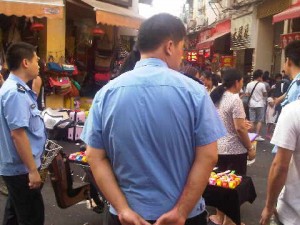 Shops sell dozens of varieties of dried fish and seafood, and some passers-by snack at will.  The same stores might also sell hundreds of types of exotic teas.  Outside, vertical skewers hold masses of slabs of pork, rather like the Middle Eastern shwarma but here the meat is laden with fat.

Nearby, chicken wings are obvious delicacies.  Some of the store holders are illegal.  A posse of young police, including a woman clutching a bottle of mineral water, come up and say something.  The illegals instantly stop cooking and wheel their carts away as fast as their legs will allow them to scurry.

Many of the customers, by the way, cannot rush anywhere.  The height of some of the girls’ shoes, or rather their heels, matches those of fashionistas in Baku and Moscow.  This time of year, Golden Week, is one of the ten best holiday times in the world of luxury lifestyle. 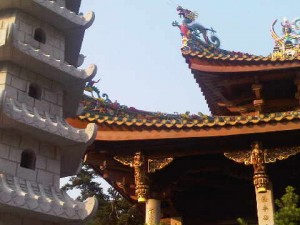 There are sights a minute here in Xiamen.  The sun is shining, the temperature is nearly 30 degrees, people are smiling.  Their life is good.  They are all so nice – many are Buddhists, and after over an hour walking up and down Zhongshan Lu we headed for Nanputuo Temple, rebuilt in the late 17th century.

Today, because of the holiday, there are thousands swarming around, but no-one makes too much noise, and not many drop anything for the ubiquitous street cleaners to pick up. In one area of the temple courtyard are two ten-foot stone ‘dove cotes’.

Throw money into the dove doorways, for good luck.  Money flows, as it does throughout this city, the Singapore of the future.