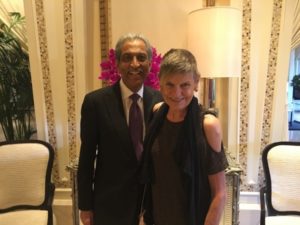 As always, a return to a Wynn hotel is a reminder of what true luxury is – well, there are only two guys with their names atop Las Vegas’ significant ballet of massive high-rise integrated resorts, and the other is that T-word. Steve Wynn, by contrast, has his signature above his golden-glass sculpture of towers that house the main 2,701-room Wynn Las Vegas and the 2,000-room Wynn Encore, and the gal was lucky enough to dine with the highly-skilled overseer of both, Ramesh Sadhwani. He was here before, actually, but then he took a spell out to work elsewhere along The Strip but as is generally known the grass is not greener the other side of the road and when Steve Wynn summoned him back this May he did so, delightedly. 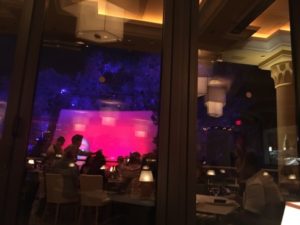 Looking out, Lake Side

We dined in Lake Side, looking out, not surprisingly, across water, but surprises came in the form of holographic illusions on the cliff the other side. We talked about the team here, a total of 12,000 in all, many of them here since the opening of the first tower, in 2005, and an amazing number were with Steve Wynn before, say at Bellagio. I had one driver with 24 years’ tenure. He had started as a part-timer when in college, and on graduation became full-time. He, like so many I talked to, would never leave. Respect for SW transcends admiration but is fortunately more realistic than worship. There are so many others in town who similarly rank him at the top of any peak – I heard stories of the city’s cab drivers being invited for overnights to try the Wynn rooms. 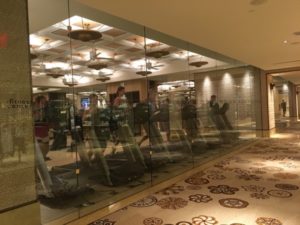 Lucky them. Wynn rooms are some of the best thought-out in the hotel industry – see the video, below, of Tower Suite 5607, which came with a booklet, Room Décor to Go, allowing me to buy a whole range of items, from 507-count single-pick Egyptian cotton sheets to a Sealy bed with patented Posturpedcic innersprings, and Molton Brown coco tonka bean fragrances. I have written before that the bathrooms are arguably THE best anywhere. They are light, bright, with plenty of flat surfaces for storage, and the open basket of toiletries is equipped with anything you might need, including retro-look silver-handled razors and big tubes of generic shaving cream, presumably Molton Brown. I was warned that the gym, which has 15 joggers among what seems like an acre of equipment, gets quite busy in the mornings. 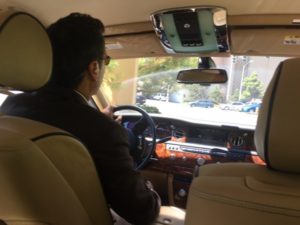 But at an early hour I was lucky.  I had it all to myself. Later, however, I wanted to check out the outstanding spa boutique, and the very stylish salon by L’Oreal ID Artist Claude Baruk – see above. At that hour, the joggers were all taken, but then, at 10.30, all breakfast tables at Tableau were taken, too (were they all, like me, offered an amuse to start, a sugar-dusted doughnut sitting in strawberry jam, with the chef’s compliments?). I left others variously jogging or breakfasting, and headed for one of the spa’s 42 treatment rooms, feeling a Hollywood star in the softest peach satin robe. My therapist worked with products of the calibre of strawberry-rhubarb dermafoliant, arctic berry peptide radiance, and bearberry eye repair, all from the Hungarian company Eminence Organics, owned and run by two young Canadian brothers, did wonders for the soul, and then I got back into a car to be driven away, by a 22-year Wynn-ophile who gave me yet more insights into how Steve Wynn, with the help of Ramesh Sadhwani and so many other followers, produce such total luxury in Wynn hotels. NOW SEE A VIDEO OF SUITE 5607

but, perhaps because it was a weekend, I was early enough to have it to myself.