Four Seasons cleverly rents an apartment during the annual ILTM gathering of luxury hotels, and other travel necessities, and this year it was turned into La Dolce Vita. Every night, sometimes until past one o’clock, the invited would gather and talk and network. Chef Vito Mollica had come from Four Seasons Firenze to create, again and again, his signature saffron risotto. The parmiggiano, in cubes from a whole round, was irresistible, says the gal, as were the Parma ham and the Prosecco, Bellavista of course. Souvenir photos were, Dolce Vita-style, black-and-white.

Not surprisingly, souvenirs at the Lungarno party, held at the Ferragamo store,  mirrored, if that is not too corny a description, the Portrait Suites for which the company is known. I am not sure if any of the guests actually bought any Ferragamo shoes, ties and other apparel during the party but at least we all left with a Ferragamo bag, which was not empty, so it is good publicity for the company. There were so many other parties that night – I loved the Conrad and Waldorf-Astoria evening, in an attic above a barn, and I have promised somehow to do Starwood next year, too, and to do better justice to Le Cheval Blanc. 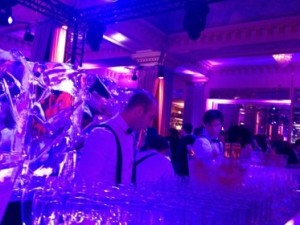 One bar area at the Majestic Barrière party

The Majestic Barrière event makes it difficult to get in, which is always a draw. Those who did have black armbands found consecutive rooms of bars, dancing, food and atmosphere. In the morning, of course, that entire ground floor was back to normal. Everyone working in one of these Croisette hotels works flat out the entire week (though I must confess the one time I ventured past the white-froth Christmas trees and into the J.W. Marriott, which I still think of as Noga-Hilton, it was to find an absolutely empty open atrium, but perhaps it was the wrong time of day). 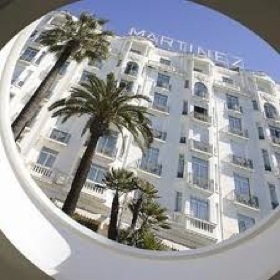 So well done, west to east, Majestic Barrière, Carlton InterContinental and Martinez Grand Hyatt. Your people were all superb. These are luxury hotels that really promote what luxury is about, namely enthusiastic and thoughtful service. And well done, ILTM organiser Alison Gilmore and her team – who have already sold more than half the available stands for 2015. If you are interested in any aspect of highest level luxury travel, mark the dates November 30 – December 3rd, 2015, and make sure you too are part of it.