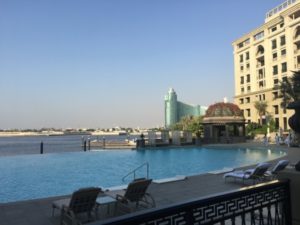 Looking back at last week’s sensational global meeting of Preferred Hotels & Resorts at Palazzo Versace, Dubai, the gal sees four main impacts, namely the serious challenge of cyber-security, how even the most successful hotelier can take a product even higher, the importance of philanthropy, and, of course, networking, with such long-time friends as Preferred’s own Lindsey Ueberroth, left above, and Caroline Michaud. Well, as we know, hospitality people are great networkers, and put nearly 200 of them in a friendly environment like this and you make new acquaintances who turn into friends before the end of the four-day event. The session on cyber security was, honestly, scary, and it could affect every operation. 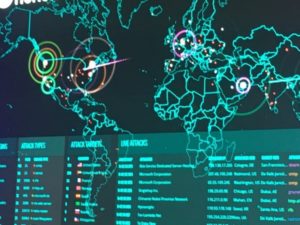 It seemed somehow incongruous, at a peaceful hotel in the UAE, where every hotel is constantly monitored by literally hundreds of cameras, to be talking security. Thanks to a really well planned presentation by a specialist, Paul Samadani, VP Information Technology at Pentair Ltd, and by an owner, Metropolitan Hotels’ Henry Wu, one of whose own hotels was hacked six years ago brought the subject right to the front of everyone’s attention (and suggested ways to avoid it happening). When that hotel was hacked, with details of 100,000 credit cards taken, the owner’s stress level soared – the card company shut down cards, cardholders were going crazy, his own sales people could not use their cards when travelling, and he could not get access to the loan on the property. And yes, there are fines, big fines: for allowing its system to be hacked, later, Wyndham settled with the Federal Trade Commission in the USA, with no sum mentioned. SEE THE KPMG VIDEO BELOW ON CYBER-SECURITY 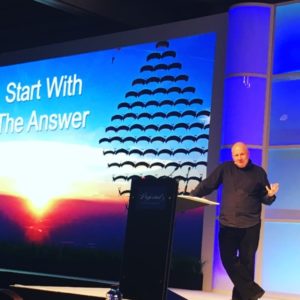 Kevin Roberts – CEO of Saatchi & Saatchi until his resignation September 1st, 2016, following a statement on gender equality – gave arguably the most relevant inspirational talk the hotel industry has ever had. Never be content with your success, and take it higher. As a decades-long rugby enthusiast, he helped world champions All Blacks retain the current title for New Zealand, but now he is changing their goal from ‘to be the best rugby team that ever played the game’ to ‘to be recognized as the best team that ever played any game’. He also stressed that leadership requires empowerment: to him, Steve Jobs was not a leader, and nor is Richard Branson, who instead inspires disciples rather than passing leadership on to others. 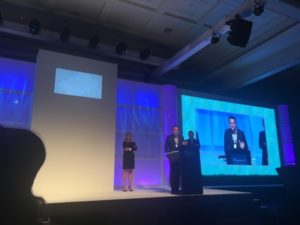 Finally, philanthropy. The last speaker was a non-stop one man charity, Doc Hendley, an American bartender who has set up Wine to Water, that allows millions access to pure water in disaster areas. But Preferred has its own community initiative, GIFTTS. Over 50 properties entered, in total representing 10,000 hours’ community service, and $11 million raised. The winner was Banyan Tree Mayakoba, where 70% of the 460 employees are involved in some kind of project, highlighted by a Seedlings programme: a dollar a day from guests is matched by the hotel, to support teenagers who otherwise would drop out of school, and currently nine are interning, with mentors, in the hotel, and a restaurant, completely run by Seedlings teenagers, officially opens January.   Then, at the magnificent final gala, more awards were announced, including best hotel in the world, the De Santis family’s Grand Hotel Tremezzo; top hotelier, Michael Davern of K Club, Co. Kildare, and lifetime achiever, The Jefferson, Washington DC’s Philip Wood, thus crowning a week that had seen his hotel garner a Michelin star for its superb Plume restaurant. And, with that, this meeting of luxury hoteliers came to an end – it was the best-ever, said one owner, who has not missed a gathering in three decades.