The gal awakes, after a long night’s sleep in a proper bed (the worst overnight flights are Boston to London as you have only just finished dinner when they start serving breakfast, and London to Dubai is crippling, but London to Delhi only allows a catnap).

Anyway, being Miss Eternal Fitness, a good workout and a fabulous massage with steam shower worked wonders, as did a full night in the really supportive bed in 6120, the prez. suite of The Oberoi Gurgaon, New Delhi Capital Region.  Alarm rings, open eyes, see a red glass bowl on one of the suite’s numerous tables.  It is filled with baby aconites, like little bursts of sun.

Sunrise from my cantilevered swimming pool terrace at the new Oberoi

As already mentioned, this, said by some to be the world’s most luxurious hotel, offers those lucky enough to be presidential quality their own 60-foot pool cantilevered out over the five floors of building beneath.  There is room for Mr and Mrs Prez to swim side by side.

This morning, a real sun was bursting over the horizon.  I looked at it, over the rooftops of traditional cupolas and 21st century cranes as the Gurgaon area expands itself continuously.  Right now it is a convenient centre half way between airport and downtown Delhi.

Since Delhi is like a recycling composter, guzzling everything put in its way as it moves, soon it will have swallowed up Gurgaon.  There are rumours it will expand to Jaipur and, by the year 2025, there might be one long built-up corridor between Delhi and Mumbai….

Print of a traditional Rajasthan baris

One of the hundred of artworks carefully displayed around this glorious hotel is a print of a traditional Rajasthan baris, what we might call a ‘cupola on legs’ (cupola, a half-dome, is a Latin word).

Typically, in Rajasthan, especially Gwalior, palaces and even private houses had baked-mud baris at corners of the buildings.  Typically, a baris’ hemispherical dome sits atop legs, say eight feet tall, that might have carved elephants as cornices.

Breakfast, with Indian-curd yoghurt and papaya

This is obviously to be an Indian day. My breakfast is home-made baked yoghurt and lots of tasty papaya. There is naturally a selection of newspapers. Whereas everyone else is trying to cut down on paper, here in India the daily papers seem to get fatter, and denser, with every visit.

The Times of India has over three million readers a day – but over 100 million copies of literally thousands of papers are sold daily.  India is the world’s biggest user of newsprint in the world.  All these trees cut down, all these papers printed, who on earth reads them and what happens to them afterwards?

Golden sculpture of a Bombay dabbawallah

I take a short last-chance trip throughout the sensational six floors of this modernist hotel.  Going down the main (that is to say public) stairwell from the glass-and-steel lobby, I come to the now-closed door of Amaranta coastal-cuisine restaurant.

Outside it is a lifesize gold sculpture I noticed when the door was open last night, for our memorable dinner.  The sculpture shows a man with a bicycle bearing about eight tiffin boxes, all gold.

The guy is dressed completely (hat and boiler suit and shoes) in watches, held together like milkbottle tops when, as a child, one made them into a basket. This is, indeed, a homage to the celebrated tiffin carriers (dabbawallahs) of Mumbai, who miraculously manage to cycle the right meal to the right  business person at the right time, day after day.

Notice the vendor's cart on top of the tuk-tuk

And so, off to the real world, the solid mass of traffic (is it true an additional 30,000 vehicles come into the Delhi scene every week?  Waved off by all my friends at the ‘world’s most luxurious hotel’, I am soon stuck in a jam.  I sit next to a police car, an ancient Ambassador.

Good luck cars in India are white, silver or gold.  Black is not auspicious, although no-one has told ambassadors (small A) as the diplomatic corps, completely, goes for black.

Near Connaught Place, the focus of old Delhi and what some say will once again emerge as its centre, there are some tuk tuks.  What is new?  Well, the little carts selling drinks and snacks that are transported to and from their slot by tuk tuk (see the photo). 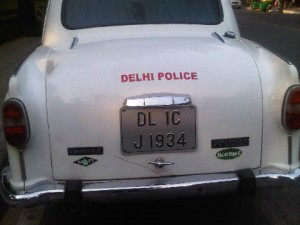 Police car, Delhi (it is a traditional Ambassador)

In New York the vendors at Central Park South are picked up by serious trucks.  Here you simply shove  your cart on a tuk tuk.  What else is new since my last visit?

The streets are noticeably cleaner, many traditional white bungalows are now in danger of their roofs falling in because of the weight of the solar panels they bear – and the pavements are still so high off the road that even this energetic runner can barely make the grade.  Heaven help any handicapped person, or someone with a stroller.