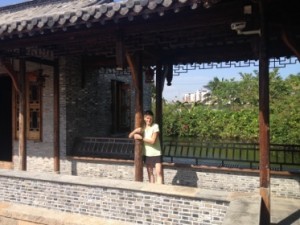 Someone outside the Wood Art Museum

The gal is visiting a unique museum – and it is part of a luxury hotel. The owner of Kempinski Hotel Haitang Bay, in the Sanya area of Hainan Island, is a wood magnate who always longed to have his own hotel. As well as putting up what was originally intended to be a 626-room hotel with inland canals, he also transported, stone by stone, a two hundred year old Shanghai-style house, single level, tiled roof and two big inner courtyards. This is now the hotel’s Wood Art Museum, for hotel guests to visit, and learn, as the gal did. 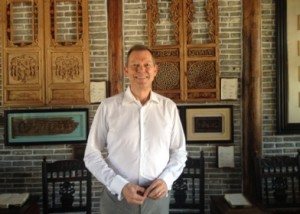 Rudiger Hollweg in the museum

Rudiger Hollweg, GM of the hotel, showed me around the Wood Art Museum, essentially an eight-shaped building with rooms facing into either of its two courtyards. These rooms are filled, with old carved chairs, wall panels, palanquins that used to carry emperors and mandarins around. I guess for those who are besotted by wood, this is the place that will help besot them further – seriously, it is interesting to see, as is everything around this hotel, which the owner helped design, by the way. 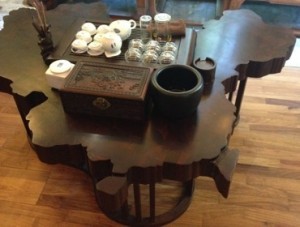 He has put wood wherever he can. Look at this table, its top a map of China, the little blob nearest the bottom of the picture is Hainan Island (think of a map of Australia with Tasmania hanging off the bottom, so to speak). Because of the cutback in government spending in mainland China, the owner has sensibly delayed opening some of the rooms so at the moment the hotel has only 399 rooms, plus villas (more anon). I think mine, 3615, on the top, sixth, floor of block three, is about the nicest as it is duplex. 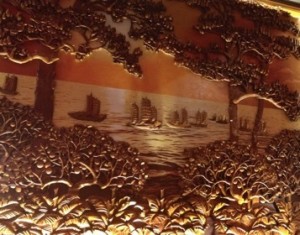 Climb stone stairs, with a heavily carved wood balustrade, up to the bedroom, and an outside eyrie terrace with full circular bathtub. Behind front desk in the imposing 30-foot-high main lobby is, well, a 20-foot high carving, showing an allegorical scene of an invasion in Chinese history. The front of the desk is carved, everything is carved, though the floors are stone. But the ceiling rises up to an inner dome, its sides intricately carved, and beautifully floodlit. 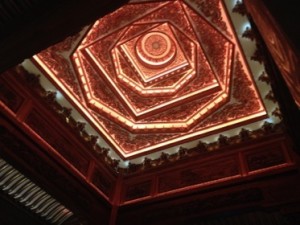 Looking up into the lobby’s carved ceiling

Climb more stairs, 48 in total up from the restaurant at lower level, and the lobby ceiling at this remarkable luxury hotel is shown in all its glory – actually this is the best view of the lobby ceiling as you do not have to crane your neck. Visitors are taking photographs the whole time, but then Chinese and cameras go together like biscuits and cheese, or Dom Pérignon and a Riedel glass…. talking of which, it is time for more exploration….