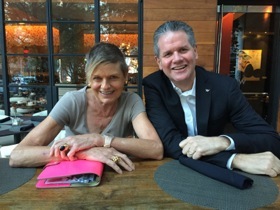 Drew McQuade runs a remarkably quirky luxury hotel, W Austin, Texas. The gal was told there used to be warehouses here, at Second and Lavaca, just north of the capital city’s Lady Bird Lake. Then developers moved in, and considerable money came from Magic Johnson‘s Canyon Johnson Urban Fund, and, indeed, he helped open the 251-room hotel, in December 2010. Outside, architects Andersson-Wise have deliberately left a bit of a warehouse feel, with, at ground floor level, rusted metal sheeting and lots of wood. 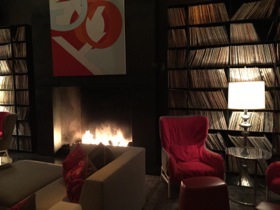 The ground floor public areas again evoke warehouses, with wood timber floors and high-high ceilings. A succession of Living Rooms allow you to sit by log-look fires in an ambience that suits best. This might be The Library, which has a whole wall of vinyls. I asked Drew McQuade, who came here three years before the hotel’s opening, where these historic records came from. My wife, he said, pointing out that there are 8,000 of them, all different. It is this type of hotel. The main designer, Heather Plimmer, has used masses of imagination. 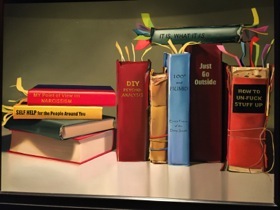 A painting of books…

Look at this painting by Tracey Harris, he urged. Yes, look at some of these titles, Self Help for the People Around You, My Point of View of Narcissism, DIY Psychoanalysis, How to Unfuck Stuff Up and so on. He showed me the walls and ceiling of the intimate outer holding lobby, between the pavement and the main lobby: leaf-shape cut-outs are back-lit to remind you of the sun shining through trees around the nearby lake. Once inside the lobby, you walk in a gradual S-shape to the front desks, behind which there are shelves of real cacti, again back lit. 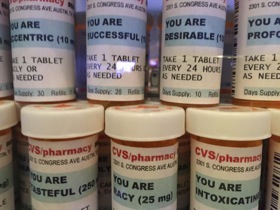 Near one desk, not far from the print-your-boarding-pass machine and the ATM, there is another wall-set artwork, in the form of a glass-fronted medicine cabinet. Look at the supposed assessments, ‘You are successful’, ‘You are racy’, ‘You are intoxicating’ and ‘You are desirable’. This is indeed a remarkably unusual luxury hotel that boosts the guest’s self-esteem…