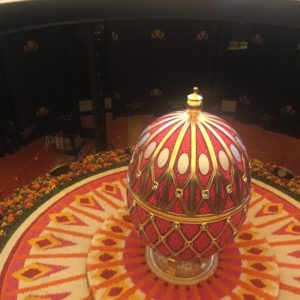 The Fabergé egg is about to have its flowers replaced

Steve Wynn already had thousands of bedrooms in Macau, but he obviously wanted more. Wynn Palace Macau Cotai added 1,700 rooms, smallest size 760 sq ft, to his portfolio, and the gal was pleasantly surprised to find that this new luxury hotel, which opened August 2016, already has an established character that is uniquely its own. Wynn’s favourite designer Roger Thomas has themed it for the fairground, with appropriate whimsy and, honestly, selfie spots wherever you look. Take pictures by the working carousel, above, or a ten-foot Fabergé egg, both covered in tens of thousands of fresh flower heads (the resort is now growing its own to cut down its exorbitant floristry bill). 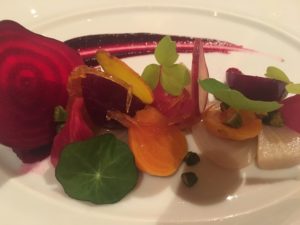 Colour in the beetroot salad

One of the many wows here is at SW Steakhouse, the SW of course standing for the boss. Such inconveniences as not having daylight are no impediment to this creative genius, so what he and Roger Thomas have done for this interior space is give it hologram shows, at least six per evening. Part of one decorated wall slides back to begin a show devised by Preston Bailey, a high-tech artist who has worked with Disney and whose private clients have included Oprah Winfrey and Michael Douglas and Catherine Zeta-Jones – he also decorated the wedding of D. Trump and Melania Knauss in 2005. The shows here at Wynn Palace Macau are spell-binding – see two excerpts. below, and then read on. 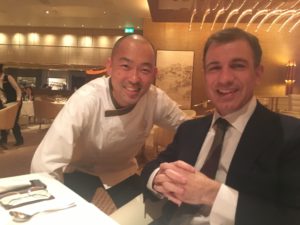 But do not get me wrong, it is also well worth heading to SW Steakhouse for its food, and its service. I started with a multi-coloured beet salad and went on to a Snake River Farms Angus Cross New York Strip, from Idaho. Chef Burton Yi came out to check that all was well (it certainly was), and afterwards I headed back up in suite 2358. As always with Wynn the main corridor colours are cream and gold, with an abundance of off-white lacquer and what seems like acres of mirrors – in my suite, indeed, one full-length mirror swings around, on vertical hinges, to reveal the wall-set safe behind. But this suite is actually more colourful than other Wynn properties, as here, Roger Thomas’ playful fairground elements come into play. 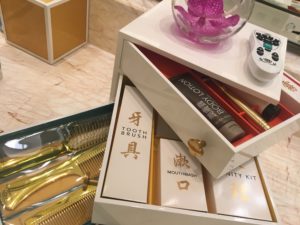 Why, I wonder, do I have so many early starts? Of course, with Tony Costa running this luxury hotel everything happened as if clockwork. My room service breakfast arrived on cue, with very-stylish deep gold-edged Mana linen napkins, and Patra china with gold decoration, and Christofle cutlery. I was escorted through various lobbies, where the tens of thousands of flowers on the carousel were being replaced, and 15 minutes later I was at the TurboJet terminal for the ferry direct to Hong Kong International Airport. This is by far the best departure, by the way: the jetfoil drops you right at the airport, and you simply take a shuttle train direct to the terminal – you also pick up HK$120 enroute as, leaving this way, for some reason you are refunded the usual departure fee. Even those gamers who lose millions at the tables back at Wynn Palace Macau, or wherever, must agree that every little counts, especially when you are trying to become as rich as a Gates, Ma, Zuckerberg, or Wynn. NOW SEE MY SUPER-SUITE, BELOW