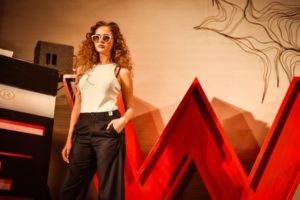 W Guangzhou is the city’s Wear, as in fashion, hotel – everything with this luxury hotel brand has to be W-ed, if possible (this is the Wild and Wacky, the Whenever Whatever concept, as devised by Barry Sternlicht at the end of the last century). This particular W held its first twice-yearly fashion week two weeks ago – look, above, at how the three-floor lobby, designed, like the rest of the 317-room hotel, by Yabu Pushelberg, was an absolute natural when it came to fashion theatre. During the Week there were non-stop events, says the gal. 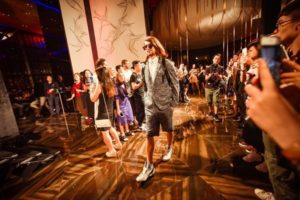 .. with models from all-over

Designers came in with models, and their local KOLs, Key Opinion Leaders (or influencers) from Spain, and from Japan and Taiwan. Locals flocked. There were fashion shows, and workshops, and pop-up shops. You could even learn how to design your own gear. I am, I must admit, impressed by how fashion-conscious Guangzhou is – walking along Xiancun Road I saw as many chic outfits on young women as I would have expected in Seoul. With the exception of the fashionista males, particularly managers, running the hotel, most of the men are only just above the T-shirt and old jeans level. 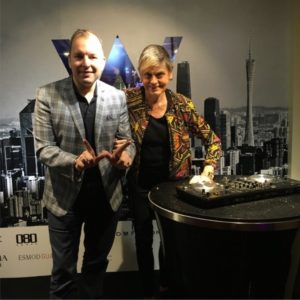 Come the end of every week, and Fashion Friday shows what the 600 employees, who also look after 167 long-let residences, can do. The way both sexes dress then is totally admirable (and, thankfully, a far cry from the ghastly dress-down Fridays in some New York offices – I shall never forget the hole-full sweater Paul McManus wore one Friday when he was the much-admired CEO of Leading Hotels of the World). More fashion and W Guangzhou: last month, also, GM Florian Kuhn from Frankfurt and his French chef, Philippe Bruneau, hosted their first pop-up Michelin-ator dinner. Thirty diners, 30-35 age group, had a surprise move-on dinner, and it was black tie. 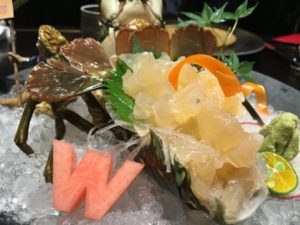 Florian Kuhn arrived in town April 2015 and since then, it seems, he has been coming up with ideas, non-stop. My 27th floor room, a lovely suite with a big terrace, was decorated with welcome lollipops and a make-it-yourself model of the city’s iconic Canton Tower, at the top of which he had thrown a cocktail party a short time ago – see the video, below, to get an idea of my temporary home.   Tonight, we ate sushi, tempura and more, at I BY INAGIKU, and he shared how originally he had planned a career as a professional fencer. I am privileged to learn something every day in my study of luxury hotels and, I confess, the more I know, the more I am still surprised, delightfully. SEE THE VIDEO BELOW