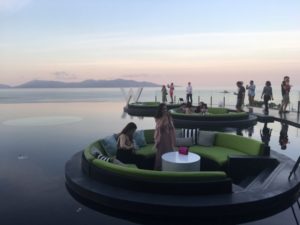 Arrive at Vivanta by Taj Madikeri, Coorg, and the welcome takes place beside a giant decorative pool cantilevered high over India’s rainforest valley below. The gal never thought she would see anything so striking, anywhere – but look, above and left, at WOObar, stretching out behind the oh-so-wow luxury W Koh Samui hotel. Similarly, the 100-ft circular pool stretches out, five floors above the flat beach-set land of this northern part of the island, at Maenam Beach. The WOObar is such an attraction that they not surprisingly charge 800 baht to outsiders wanting to come in. 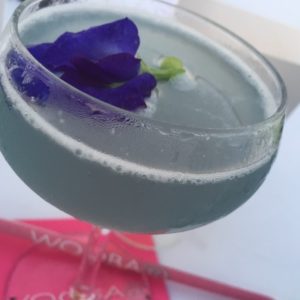 But this sum, cleverly, is redeemable against drinks or food. The hotel, owned by Sunny Bajaj, whose portfolio also includes InterContinental Pattaya, has many sensational eatertainment ideas, including 24 designer cocktails, half by Vesper Bar in Bangkok – named by its owners, Choti and Debby Leenutaphong, after James Bond’s favourite martini – and half conceived by Amsterdam’s Cocktail Professor. It was he who designed my drink, ‘Born to the purple’, complete with a floating flower.  The concoction itself is Tanqueray, apricot liqueur, crème de violet, lemon juice. We sat in the most desirable of the inset sitting pods, the one nearest WOObar’s signature W sign, and watched nonstop selfies being taken as the sun set. 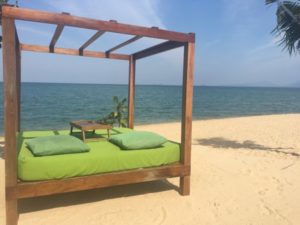 Every one of the 74 villas here has its own pool and some guests, particularly honeymooners, never leave their compound (most villas are completely surrounded by high walls. I was in the 3,500 sq ft WOW Ocean Heaven, one of two, and the only one beach-set, to have a larger pool, 500 sq ft in all, plus a private beach. I had a separate building as my living room, with full kitchen; see the video below, which shows one of my welcomes, a young mixologist making a raspberry Daiquiri. In the bedroom building the bathroom’s outdoor shower was large enough for Daiquiris for a dozen: on the bed, looking straight through all-glass walls to the beach, was a three-foot high dayglo green bear, with his own night yukata.  I should have taken my bear down to one of the inviting beach beds but he would have become invisible (but then I should have done a lot of things while here, like send more clothes to be washed and pressed, honestly the laundry could even be a reason, as if one needed it, for coming to stay, everything comes back looking not only good as new but as if it was designed by Dolce & Gabbana in the first place). 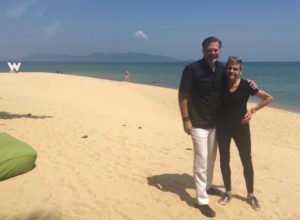 Anyway, after our cocktails that evening we headed down to Namu, the beach-set dinner restaurant that serves modern-Japanese. Near to it is the best lunch venue, the Beach Grill, which does equally-fabulous guacamole – GM Daniel Simon says in the past this luxury hotel had staged expensive annual F&B promotions, flying in a Michelin-starred chef, but locals would not pay $100/head. He switched to a pop-up Mexican restaurant on a nearby beach, and fortunately some of its highly successful dishes have been retained. This hotelier is great on many accounts, and on the drinks side he has put in a barrel room (back up in the lobby, 167 steps up from the flat area if you want, like me, to avoid buggies): here there are hundreds of tastings, in small barrels, and beers include two specially made in Denmark for this memorable hotel. NOW WATCH A DRINK VIDEO – MY WELCOME COCKTAIL, VIRTUAL TABLE-SIDE