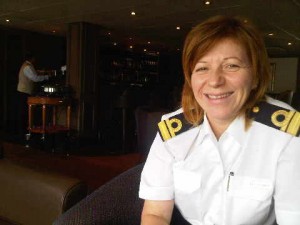 Hotels, even luxury hotels, need someone in charge the whole time but at weekends, all too often, and at night, generally, the ‘boss’ is not around.  At sea, all ships need a highly experienced man on ‘the bridge’ at all times.

If you are lucky enough to be sailing on the Silver Explorer expedition ship, one of the two key people is unique in the luxury cruise sector. She is a woman, and she is Swiss, the gal discovers.

She, Magi Ettlin, and the Captain, Adam Boczek, are on the bridge for every departure from port, and every arrival into a new place, and much of the time in between. 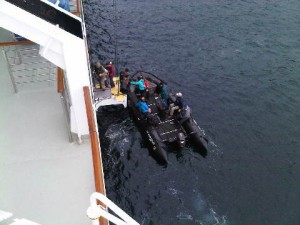 Looking down, from the bridge, at a filled Zodiac

What a fascinating story.  She is from Zurich and, bored with life working in a bank, she went to sea.  She worked as an onboard purser and the moved into running the onboard bar and one day had a trip up to the bridge.

She was hooked.  She then spent five years studying marine navigation in Italy (she had only recently begun to speak Italian), since when she has never looked back.  During her 13 years at sea as an officer she has worked cargo vessels, supervising icebreakers for the German government and as captain of private yachts.

Now, on Silver Explorer, she is Staff Captain, right hand man to the Captain.  Her own day-to-day responsibilities include the maintenance of the ship, and liaising closely with the head of the expedition team, Robin West. 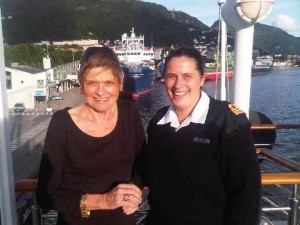 Birgit, from Austria, is the ship's Hotel Director...

She was hired by Silversea for her polar and icebreaking experience and she loves Arctic and Antarctic voyages, but then she is also fond of the Baltic and Mediterranean. What does she miss about home?

Greenery, mountains and woods, and flying helicopters.  But she is back on land about 50 percent of her time – she works three months on, three months off.  At home she is quickly into mountain-biking and skiing and catching up with friends.

Aboard, she keeps fit by continuous patrolling of her ship during the 13-14 hours that she probably works most days.  There is no set routine, but she says she has no problem falling asleep, as long as she is horizontal. 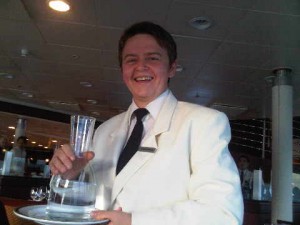 .. Oksana, from Ukraine, is a skilled restaurant captain...

Silver Explorer has a crew of 121, which includes lots of women.  The Hotel Director is Austrian Birgit Vadlau.  Although there are female sommeliers in the restaurant, the only lady waiter is Oksana, from Ukraine.

The expedition team, led by Robin West, also has lots of highly capable women, including trainee Kate who has to wear a white paper ‘beak’ with a red spot to illustrate how birds do see colour. 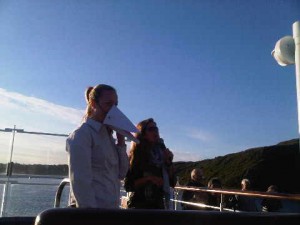 ..and Kate, from Australia, patiently wears a gull's 'beak', with red dot to guide juveniles to feed.

There is no problem supervising men, says Magi Ettlin (she prefers to wear her uniform skirt rather than trousers).  You need to be precise, she says.  Do not waffle.  The only challenges she has ever experienced were in her days working cargo ships in the Middle East. She relishes occasional opportunities to go out in one of Silver Explorer’s eight zodiacs – which are also her responsibility.

A typical day might be spent, say, anchored in the harbour off Portree, capital of Skye.  The ship had sailed from Stornoway, Isle of Lewis, just before midnight, so she was on duty until around 0100. 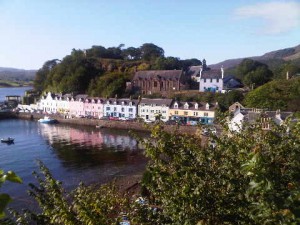 She was back on duty by 0600 as anchor was dropped as schedule at 0700.  By 0830 the first zodiacs were nipping around the ship and at 0845 the first group of passengers, all wearing statutory lifevests, were being helped down into one of the craft for the eight-minute jaunt to Portree dock.

And what a lovely place Portree was that sunny day. The barren, heather-covered craggy hills around were tempting to climbers. Many German tourists were enjoying fish and chips in one of the side-by-side eating places crammed between tiny brightly-coloured B&B bed and breakfast places in the town centre. 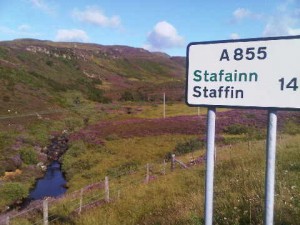 Up on the gorgeous moors, with the few signs in both English and Gaelic

Somehow there is room, too, for tweed shops and a batik place and a darned good tourist information centre.  And then it was back on to the ship, to find an email from Admiral John Lang, who has just published ‘Titanic: A Fresh Look at the Evidence by a Former Chief Inspector of Marine Accidents’, published in UK by Seafarer Books and in the US by Rowman & Littlefield.  Thank goodness we, onboard the good ship Silver Explorer, are currently in the hands of a Polish man and his Swiss female colleague.