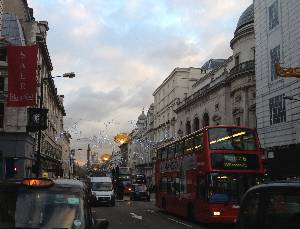 Any city is fun just before Christmas and London is no exception.  Both Piccadilly Circus and Trafalgar Square could claim to be centre of the pre-Christmas activity.  From Piccadilly Circus, with the new luxury hotel that is Hotel Café Royal behind her, the gal looked south down lower Regent Street.

With Lillywhite’s to the left, and London taxis and bright red buses, it was all very English.  It should stay like that. Thank goodness the Mayor of London, Boris Johnson, keeps the buses red.

No-one has been able to keep the taxis all black, but the main company that built London taxis (they can ‘turn on a sixpence’, apparently) is Manganese Bronze, which was partly bought by Chinese giant Geely but it went into administration this October and all staff were made redundant.  Tragic. 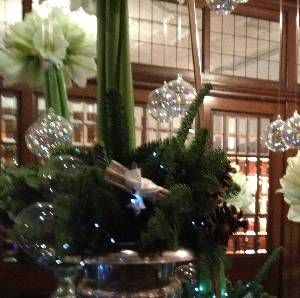 How can such an institution be allowed to fail?  I headed west along Piccadilly and turned north along Albemarle Street. I was now in WOBo, West Of Bond Street, a growing area that has newly received Christian Louboutin, men’s shoes only, and Alexander McQueen, Sir Paul Smith and lots of art galleries.

David Linley has his furniture and artefacts shop here, with items packaged, Tiffany style, in boxes with white ribbon, but unlike Tiffany’s pale turquoise, Linley boxes have more green in them.  Ah ha, we are on to colours.

I call in at Brown’s, 175 years old this year.  Its restaurant, by Mark Hix, looks full, its lobby lounge is absolutely packed.  There is barely room for the tree, which is decked in blue. 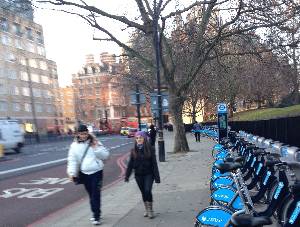 A hearty walk west takes me past several bike stands.  London followed Montreal in its exact choice of pay-as-you-go bikes, sponsored by Barclay’s Bank but it is the aforementioned Boris who gets all the kudos.  The bikes are known universally as Boris Bikes.

On a freezing and windy day like today it is not surprising few are using them, which means the stands have plenty of supply.   I go past the south-east corner of the 350-acre Hyde Park, where the ceremonial bandstand is.  This is the entrance to the annual outdoor market and, for once, I forget I am in England.

The ‘visitor manager’ (I know what his job description is because of a big sign on his fluorescent jacket) is a Rastafarian. Many of the mothers pushing little tots in a variety of Bugaboo and McLaren vehicles are veiled, and not only to keep themselves. 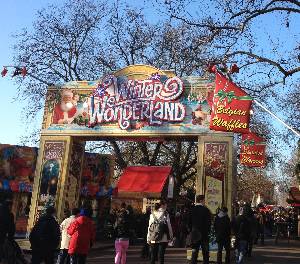 How would the founders of this, one of eight Royal Parks, react if they knew about all this internationalism. At the entrance to the free Christmas market, vendors signs hang overhead.  Want Brazilian? Want Mexican? You name it, they have it.

And there are carousels, like the one on Cannes’ Croisette, and everything edible to buy, from ice creams to hamburgers. I doubt if healthy was the main order of the day (but then I have just heard, on radio, Nigella Lawson, describing how to make an alternative Christmas cake, layers of Marsala-soaked panettone sandwiched with whipped cream-and-mascarpone, with chocolate and pistachios and cranberries on top, wanna throw up?). 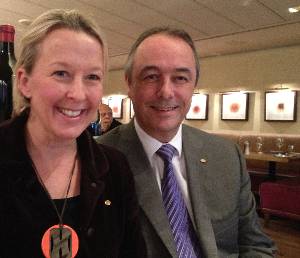 Relief, I have reached that bastion of stylish simple eating, Bar Boulud at Mandarin Oriental London Hyde Park.  Yes, it is full as always, yes, it has the right crowd – at least, I do see two happy diners I know.

I am with Tony McHale, just back from diplomatically touring Saudi Arabia, and Sarah Cairns, already getting ready for the Golden Globes in Hollywood and the English afternoon tea party she launched at Four Seasons Los Angeles, when she was working there.

Now she is concentrating on Harrods, five minutes’ walk away.  Harrods has dressed the lovely trees in the hotel, in white and some red baubles, with the logo H on them.  Sarah wears an H necklace in camaraderie. 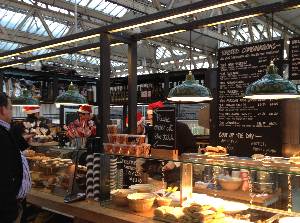 Mandarin Oriental’s doormen wear scarlet top coats all winter long, so add a few poinsettias outside and the Harrods dressing inside and the hotel is all ready for Christmas.

Apparently some Gstaad luxury hotels demand a minimum 12-night stay over Christmas and New Year – you have just managed to find your way around your palace hotel without having to ask directions and it is time to book for next year (the most difficult hotel in the world to find you way is undoubtedly Kempinski Emirates Palace in Abu Dhabi).

I leave the warmth of Bar Boulud (loved the pumpkin gnocchi) and head across town – no, not by Manganese Bronze – to another new hotel, and another fascinating evening…