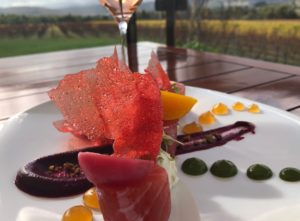 Well, it was a weekend and the gal was more than justified in taking up Tourism Australia’s kind offer to see something else of south-east Tasmania. Pickup was just as most weekenders at the fascinating Henry Jones Art Hotel in Hobart were still coming down for breakfast.  A driver from Par-Avion, Tasmania’s leading all-round transport firm, was the guide to Pooley Wines, a third generation winery in Richmond. This is a company that has a clever marketing approach. Sign up to its club for free and you immediately get 15% off any wines, say the Cooinda Vale Cabernet Merlot (50-50) 2017, and thereafter you get the same concession on any case – your choice of labels – four times a year. As is so obvious today, it is not enough to have a good product, it needs to be marketed. At that point, a four-passenger Par-Avion R44 Clipper II chopper (above), with pilot Dave, landed at Pooley Wines, and we took off to Frogmore Creek Winery in Cambridge. 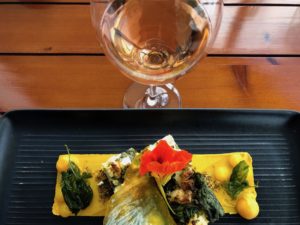 This fabulous estate is co-owned by an American, Jack Kidwiler, and Tony Scherer, voted Tasmania’s Senior Australian 2018 for therganic farming he has been promoting since 1990 (he is President of Australia’s Pinot Noir Forum).  Of course it is rude to arrive at a vineyard and not say yes to a tasting.  Frogmore Creek probably had over a hundred already having lunch but first I was led through some excellent Rieslings by a charming Beijing architect, Stan, who had given all that up to follow his passion (I am NEVER going back, he said firmly as he poured the 2017 Frogmore Creek Riesling that garnered Silver in the 2018 Riesling challenge).  And then I sat down, looking at vineyards through all-wall windows.  Both my dishes were exquisite. First I had a beetroot-cured salmon belly with mulled apple gel, baby beetroot and tzatziki yoghurt. This was followed by a sweet potato, pumpkin and baby spinach frittata with spiced pumpkin curd, mandarin gel, pickled butternut, pistachio dukka and pumpkin: its recommended wine pairing was 42 Degrees South 2018 Rosé. 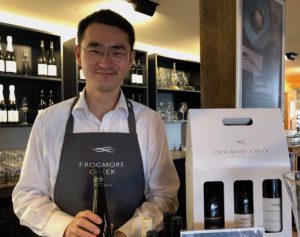 I was getting addicted to being chauffeured round by Dave. Just as in Napa an increasing number of winery tourists use Uber to avoid having to drink and drive when hopping from one wine house to another, here, travelling by Par-Avion makes a lot of sense. I would also recommend anyone short of time to use them to get quickly to and from Saffire Freycinet.  On my day, however, Dave stayed nearer to Hobart. His last stop was to Shene Estate & Distillery, a stately-home stone concept built 1856 in English mansion style, though I have yet to come across any notable Cotswolds-type buildings where solid stone walls are paired with corrugated iron roofs.  My host here was Anne Kernke, who bought the ruined mansion with her husband David, between them on a lifetime’s conservation mission to create a living heritage that is also viable. 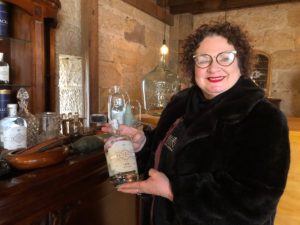 Frankly Anne Kernke is such a bubbly enthusiast she could sell Shene Estate as an event space to anyone, a wedding planner or a car company (the main double-height barn now has Murano-type working chandeliers). She is the main tour guide, and also business developer for the distillery that husband David oversees – see her explaining, below, how their Poltergeist gin came about – it is dedicated to Gamaliel Butler, who built Shene in 1856 and then went on to give his wife 16 babies. Every visitor to Tasmania should have tastings of Mackey whisky, named for the Kernke’s former business partner, Damien Mackey.  Shene Estate, which is featured in Lonely Planet’s just-published directory of distilleries round the world, is so far best known for its filtered and unfiltered Poltergeist (it is a member of Tasmania’s Gin Society).  Try both, at the bar at one end of Shene’s main hall. But while you are on the island, if you have time there are dozens of other distilleries and wineries to visit: to get more ideas, Wine Tasmania produces a handy guide, www.winetasmania.com.au, which includes events geared specially for would-be connoisseurs, say the upcoming Tamar Valley taster, May 24-26, 2019, and, September 6-8, the Great Eastern Wine Weekend at Freycinet Lodge, ten minutes from the gorgeous Saffire Freycinet luxury resort. NOW FLY OVER HOBART, AND VINEYARDS, AND VISIT ANNE KERNKE AT SHENE ESTATE