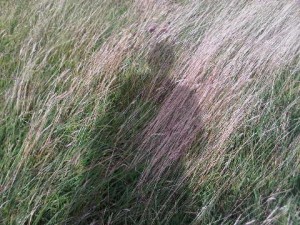 Shadow and wind, thanks to grass growing near-flat because of the prevailing gales

Ever wonder why luxury hotels have hairdryers? If you do not think YOU need ’em, you do in the Scottish islands. The wind of the Orkneys makes Chicago seem fine for the latest hair-do (OK, that may be called the ‘windy city’ but if Mayor Rahm Emanuel were to head here, to these 70 islands north of Scotland, south of the Shetlands, even his coiffure would suffer).

The super-ship Silver Explorer sailed there, the gal on board to see if it is true that even blades of grass are all at diagonals.  They are, even in the capital, Kirkwall – where the best hotel is West End Hotel, built as Kirkwall’s first hospital in 1824. 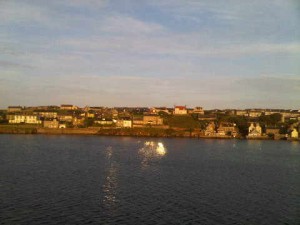 Sailing into Stromness, in the Orkneys

The luxury ship Silver Explorer sailed in to the second Orcadian town, Stromness, just after dawn.  This little port, population 2,000, takes pride in numbering George Mackay Brown among its citizens.

Docked in the harbour are several fishing boats which catch seafood and crustaceans for export live, mostly to Spain.  There are also, today, some scuba divers heading for the sunken German ships in Scapa Flow (74 ships were interned there after the first world war, and scuttled by their captains – seven still remain submerged).

The Orkneys have a total population of 20,000, plus 100,000 cattle (all called coos) and 150,000 sheep (the same as the number of tourists each year).  Naturalists go crazy about the grey seals, and Arctic terns, black guillemot, and minke and killer whales. Also on the check list are two whisky distilleries (Highland Park, and Scapa). 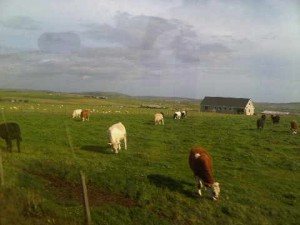 As we drive around Mainland, the largest of the islands, we look across Scapa Flow to some others.  Flotta has an oil terminal. The east of Mainland, which is figure-of-eight shaped, is joined to Burray and then on to South Ronaldsay by Churchill Barriers, breakwaters ordered by then First Lord of the Admiralty, Winston Churchill, to prevent German U-boats entering Scapa Flow from the North Sea – they were built by Italian prisoners-of-war.  We hear history.

We look at coos, sleek grass-fed animals, taken inside during the winter as it is so wet then.  The black Angus are exported, live, eventually to end up at Harvey Nichols and Marks & Spencer. 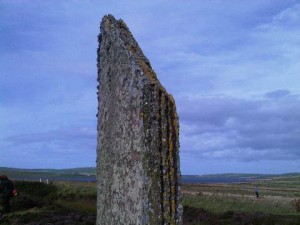 One of Orkney’s archaeological treasures is Ring of Brodgar, a Stonehenge-like prehistoric circle

Today’s luxury educational is the pre-history of this island.  First, to the Ring of Brodgar, which makes Avebury and Stonehenge, down south, seem young.  Stonehenge is dated 2,300 BC, the Ring of Brodgar from 2,700 BC.  It once had 60 tall stones, set exactly six degrees apart, in a circle 330-feet in diameter, the same as Avebury.

The Orkney islands are sandstone and the 27 surviving stones are thought to have been quarried four miles away.  Were they set up as a calender? To the south, the gap between the two highest mountains on distant Hoy Island marks the winter equinox.   A peak far to the north, still on Mainland, is the summer equinox.  Nearby, digs are going on at the Ness of Brodgar Neolithic complex. 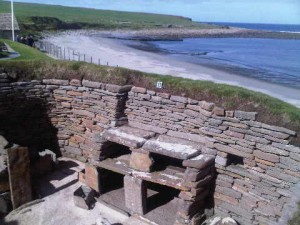 A look down into a section of a Skara Brae house (3,000 years BC), below ground with a driftwood and grass roof

Today the wind blows, but it is relatively gentle, says our guide Anne, who moved north from Norfolk ten years ago.  She is part of the Polar Club, who do an ocean swim every Saturday at 1000.  Come and join in, she says.

In winter they are in and out.  In summer quite the other way…  although summer temperatures are never more than 16 degrees and, because of the Gulf Stream, winters are average six degrees, with little snow, no frost, just wind, and many many hours of darkness. 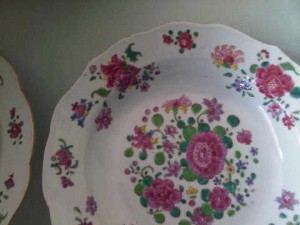 We are going back in time.  Next spot on the archaeological tour is a cracker for any history nut.  Skara Brae is a fixed domestic settlement – for which read village rather than transient camp – that is dated back to 3,100 BC.

It is in one of the windiest areas of Mainland, near only a centuries-old mansion, Skaill House.  It was the owner of that house, William Graham Watt, who in 1850 noticed that a storm had uncovered a few cliff-top stones.  He started digging.

Now the site is known to hold at least eight Neolithic houses and one workshop, all built dry-stone, of flat pebbles and enormous slabs, and partly underground. The midden, household rubbish, is being meticulously sieved, to the delight of anthropologists. 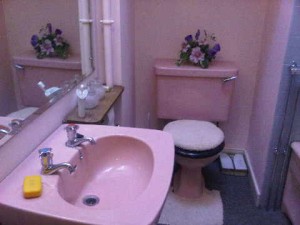 After this, Anne said we could go to the gift shop and café that  accompanies all historic sites, it seems.  No time, as it happened. We headed instead to Watt’s house, built in 1620 by Bishop George Graham, a fascinating tale of more recent times.

The present owner of Skaill House, its 13th Laird, is Malcolm Macrae, who heads Orkney Cruises, coincidentally ships’ agent for Silversea and other cruise lines (he has brought 84 ships to the Orkneys this year alone).

His own ‘midden’, modern style, includes a selection of walking sticks.  A fabulous just-made tall-backed Orkney armchair, made of driftwood and reed, is the work of talented young carpenter Fraser Anderson. 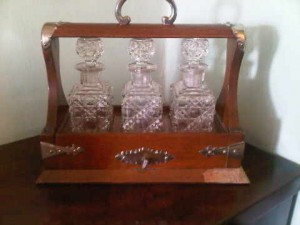 A tantallus, with lock and key, holds cut-glass carafes for precious alcohols

The family dining room holds priceless sets of china, including the pink-rose set used by Captain Cook on one of his voyages, and possibly later given in settlement of an outstanding bill.  Nearby is a tantalus, a wooden and silver holder for three cutglass decanters, whose liquid contents cannot, tantalisingly, be reached without a special key.

There are silver framed photos of Royal visits and endless photos of smiling brides who still, all summer long, choose this as a perfect wedding place. Malcolm Macrae’s mother’s bedroom has been left much as it was when she died 20 years ago.

This is a time-warp of fashion, with the elbow-length buttoned white leather gloves that a society lady of her era needed. We ooh-ed and aah-ed at her bathroom, its pink 1950s furniture – oh so chic – complemented by pink mats and seat covers, all of which went so beautifully with a block of bright yellow Coal Tar soap. 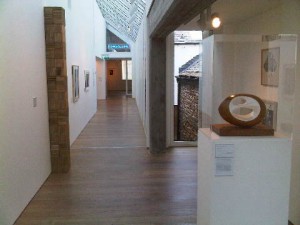 Back to the present, to the joy of the luxury life aboard the Silver Explorer, docked among the characterful craft of Stromness. We looked across, to the imaginatively named Stromness Hotel, most convenient for art-lovers drawn to this appealing town by its Pier Arts Centre.

Now through November 17th, 2012, it is showing pieces collected by a Radley College-educated solicitor, Derek Williams, 1929-1984, who bought L.S. Lowry, for instance, long before he was fashionable.  But at any time the Centre is a MUST. 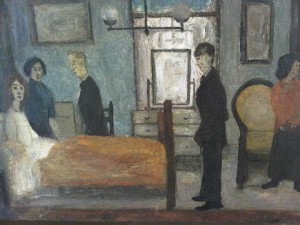 .. where the current temporary exhibition includes some L.S. Lowry treasures

A brilliant reconstruction, by Edinburgh architect Neil Gillespie, of the one-time offices of the Hudson’s Bay Company, it has Barbara Hepworths and Ben Nicholsons and so much more, the nucleus collected by an activist philanthropist, Margaret Gardiner OBE 1904-2005.  Not to be missed.