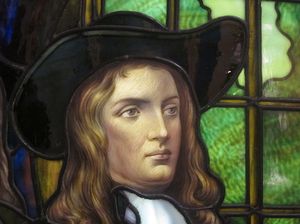 The State of Pennsylvania is named for William Penn, seen here in a 1909 painting by Frederick Mortimer Lamb, in the Brooklyn Museum, but since Penn lived 1644 to 1718 it is unlikely this looks anything like him.  What would Penn say, the gal wonders, if he could see Philadelphia and Pittsburgh and their luxury hotels today? He was born in London, son of an admiral and his Dutch wife, and in 1681 he first travelled to what is now the USA to claim land given by King Charles II to repay a debt to his father. 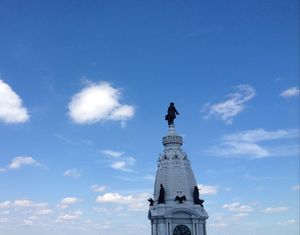 .. atop Philadelphia City Hall, by day…

He had an amazing life, and somehow had time to marry twice, and have a total of 16 children. Today, arguably the most famous likeness of him is the bronze statue on top of Philadelphia’s City Hall: the statue, which is 37 feet high, is hollow and apparently you can climb up inside him and stick your head out through a 22-inch hole at the top of his head.  Alexander Milne Calder, father of the Logan Circle fountain Calder, sculpted this piece, and 249 other sculptures to adorn the City Hall, designed by John McArthur Jr and finished 1901 at a cost of $24 million. At the time it was the world’s tallest building and, at 548 feet, it is still the world’s tallest masonry building. 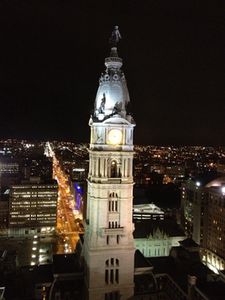 The closest you can get to Mr Penn is from one of the corner rooms, say 2902, of The Ritz-Carlton Philadelphia, one block away.  At night, the clock-faces, each 26 feet across, on the four facets of the tower, are brightly lit but its sonorous bell falls silent. The chimes start again at nine in the morning, a bong sounding every 15 seconds.  Stay in room 2902 and your gaze is drawn by Just William.  But you are in an extremely fascinating building right here, in the hotel, a conversion and expansion of the former Girard Trust Company Bank.   The original building, a giant rotunda for the banking hall, took 9,000 tons of Georgia marble and cost $1.5 million. 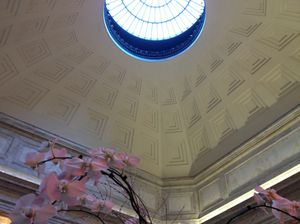 Looking up into the Ritz-Carlton dome

Architects McKim, Mead & White saw their design finished in 1908.  A hundred feet in diameter, the oculus soars up 142 feet, as high as Rome’s pantheon.  This dome, so long the banking symbol of the city, is now the life and soul of the Ritz-Carlton party: the 330 bedrooms are in a 30-floor tower next to the dome (the paneled club lounge, on the top floor, has the best views of all).  You enter the hotel’s ‘lobby’ to find yourself under the dome, you look up, amazed at the symmetry and the simple beauty of it. 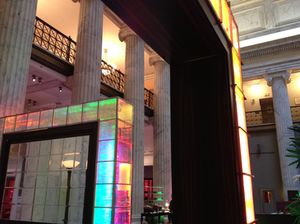 At ground level, there are day-glo arches

The lobby is full of life 24/7. Even early on a weekend morning, like just after day-break, I found half a dozen others admiring the dome, up above, and, at ground level, the day-glo panels.  This is truly a 21st century complement to the original building.  There is a bar at the back of the entire area, with sports televisions over.  In the centre a circular spot about ten feet across is cordoned off, as it were, by strings of pearls.  There is plenty of seating, so you can look up to the dome, or around you at what is going on – and something always is. 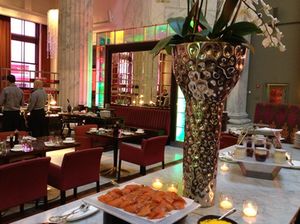 Another area of the dome is the main restaurant, X Arts Bistro, called because this awesome luxury hotel is technically at Number Ten Avenue of the Arts. At breakfast you can help yourself (lovely, there is a buffet), great smoked salmon, a range of smoothies and real Greek yoghurt.  Room 2902, however, has access to the top floor lounge, where Mimoza from Albania is charmingly in charge. Up here, I can break-the-fast and look out at Mr Penn, freezing – in statue form – out there on top of City Hall.