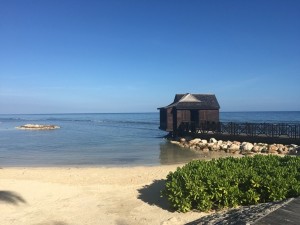 At some point during the evolution, which in this case means constant upgrading, of the marvellous Half Moon luxury hotel near Montego Bay, two overwater cabins were added. They are part of Fern Tree Spa, which has no less than 12 additional land-based rooms, and a total of 21 therapists. The gal had the first appointment, at eight a.m., and she was led out along the boardwalk to the cabin on the right of the photo. Is there anything more enjoyable than having a spa treatment with the far wall of the overwater cabin opened to the elements, so there is a continuous light lapping of the waves… and if you look down, through chinks in the floorboards, there is the water, beneath. 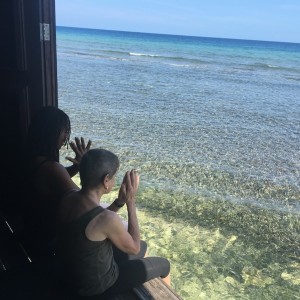 .. one is sometimes used for yoga

But I was actually having the most marvellous facial, so I looked up, at the wood ceiling, rather than down (I never asked why having pretty-hot stones under my back, and in both hands, helped my face become rejuvenated but I did feel fantastic when it was all over). And then I walked, along the cross boardwalk, to the other cabin, for a yoga lesson. Gosh this place takes yoga seriously. The day I left, the yoga types on offer were Aqua, Detox, Hatha, Lyengar, Therapeutic and Vinyasa flow (and for yogophobes there was body barre fitness, meditation and pilates, as if everyone was getting in shape for the GM’s regular weekly cocktail). I just about survived 75 minutes of gruelling anonymous yoga with five women who were near professionals, and we finished with a namaste overlooking the water. 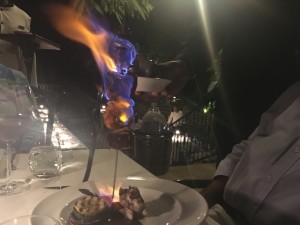 To complement this fitness there was a lot of really fine eating during my stay, and the amazing thing is that every one of the dinner restaurants seems to be packed, night after night. GM Sandro Fabris, a real foodie through and through – he it was who in an earlier existence devised that splendid buffet room at Costa Smeralda‘s Hotel Cala di Volpe – says with pride that 35% of diners here are from outside, drawn by reputation. Take Sugar Mill Restaurant, a two-million US conversion of a 19th century mill, its 20-foot vertical water-wheel still turning, silently. Lush undergrowth comes up to and seems to absorb the old ruins. Dine outside, right by the wheel, or at a lower level, or inside (but, despite having 165 seats, this restaurant does need reservations). 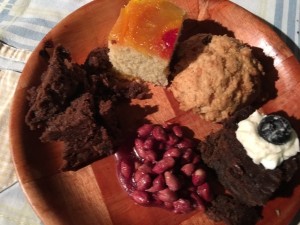 Oh what a marvellous wagyu striploin, cooked on Jamaica’s only Josper Grill – chef Christopher Golding wins all kinds of awards. Our table also had vertically-hung brochettes, flamed at table. We did not, by the way, go for a signature 50-year old Appleton Jamaica Independence Reserve, the world’s most expensive rum, at $500 a tot. Nor did we go on to Jamaican tarte tatin, with pineapple and chocolate, and a side of sorrel sorbet. On another occasion, however, we did have plates of typical Jamaican desserts, which includes a Tia Maria chocolate pudding. This is truly a luxury hotel that runs the gamut, from some of the world’s finest meat to local puds!