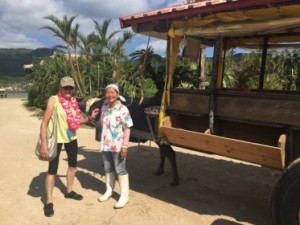 Making friends with a certified animal and driver

People make friends very quickly on a luxury expedition ship of the calibre of Silver Discoverer, and the 11-day trip through Japan’s inland sea and then south through the Ryükyü Islands is generating lots of friendships. There is the American who is besotted by trains, and in fact all types of transport. Travelling by water buffalo cart to and from Yubu Island, off Iriomote, was, however, a first for him, as it was for the gal – who then wanted to make friends with one of the animals. Every 30 minutes, on the hour and half-hour, a cart shuttle takes you from Iriomote across the shallow channel, 15 minutes to the other side. Progress is so slow that actually a local wading across in long white Wellington boots made it more quickly. 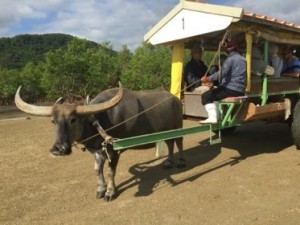 A cart prepares for the (shallow) water crossing

The carts, which hold up to 14, rather charmingly have wood roofs that look like tiles. The driver has a flap at the front of the cart which he pulls up when his animal decides it is time to relieve itself – a modesty panel. Some of the drivers carry ukuleles which they play during the crossing. Coming back from Yubu Island I was pulled by a four-year old female youngster, and the 27-year old driver admitted it was only his third-ever crossing. The water buffalo are all related – see their family tree in one of the many ‘reception centres’ on the island. Actually once on the island the experience becomes rather humdrum: as with many places in Japan, commercialism takes over, and you are expected to pay to have photographs taken with the animals, and to buy souvenirs. 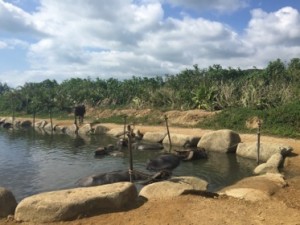 But I preferred a hearty walk around the little island that Mr and Mrs Seiji Iriomote, at one time the only residents, were determined to make a dreamland. Yubu Island, which is boomerang shaped, is only 2.15 km around, and the whole area is densely planted, with ten types of palm trees, 30 different hibiscus, a butterfly garden and a Bougainvillea garden. Some of the 40 water buffalo can be seen relaxing in a pool, between work sessions. They eat twice a day, breakfast and lunch, eating grass and grains. I think of the water buffalo in the paddy fields at Four Seasons Chiang Mai, namely the family of Mrs Mud Buffalo, Mr Sand Buffalo, Mr Tuek Buffalo, Mr Tone Buffalo, Mr Thae Buffalo and baby Tong, an albino. Their daily routine starts at 8 a.m. before an 8.30 a.m. bath, then working the paddy fields until grass lunch at noon, back to work 1-3 p.m. another bath, a bit of a tour and off duty at five. 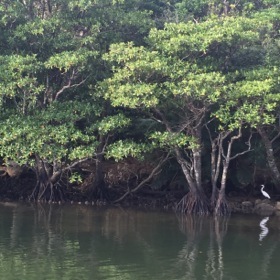 An egret in the mangroves

On Iriomote the luxury expedition ship Silver Discoverer had also arranged an hour-long cruise through the mangroves on Urauchi River. We lazed our way learning about different types of mangrove. Yes, we saw egrets but none of the soldier crabs or fiddler crabs, or Ryükyü ruddy kingfishers that are indigenous here. Had we more time we could have hiked to waterfalls or kayaked, or looked at some of the old coal mine sites (they also do an exciting sounding study-the-stars tour).