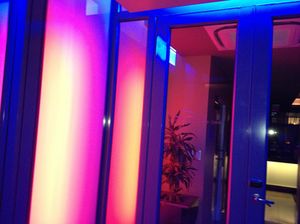 Here we are, in without doubt the most stunning urban business-type luxury hotel of the 21st century, in the whole of sub-Saharan Africa.   At Hilton Windhoek, on the Reverend Michael Scott Street in the centre of town, one of the three elevators is slightly apart from the others. The one by itself, so to speak, has a day-glo red side so that when it is the first to soar up, ready to take you to wherever, you know to rush over from the other two elevators – you are probably waiting by the others as you have a 66.7 percent chance of standing in the right spot. The gal appreciates such thoughtfulness, on the part of the designers, and the owners (see below). 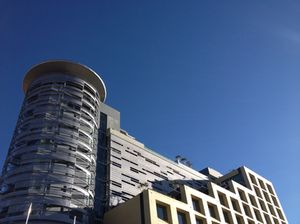 The hotel opened in 2011 and it looks like a giant modern sculpture, nine floors high.  There is the shiny steel bit, with a rounded end.  Stuck on to one side, as if by super-glue, is a sand-coloured building.  At first you are not sure if they are one or two structures. Five architects were considered, and a local company, Jaco Wasserfall Architects, was chosen.  They have deliberately made a Big Contrast with life around: look down from some of the bedroom windows and you see a classic, lifesize bronze sculpture of an intrepid German colonial commander in a big ranger hat, one Curt von François 1852-1931.  Windhoek, capital of Namibia, likes to remember its past. The Reverend Michael Scott, it turns out, was a British anti-apartheid activist: his street crosses Fidel Castro. 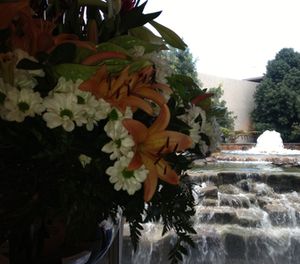 Enroute to Windhoek, stop off at InterContinental Johannesburg Airport

But first, how did I get from the Windy City that is Chicago to Windhoek?  Windhoek airport is not totally memorable and its airlines are limited to Air Namibia, Comair/British Airways, South African Airways and Angola’s carrier.  I took the obvious route, flew British Airways to Johannesburg and transited on to Windhoek, with five hours’ stopover.  What to do?  The obvious solution is to go through immigration – not even a form to fill out – and walk a mere 100 yards to the very agreeable InterContinental Johannesburg Airport.  Take a day-room there for a couple of hours.  There is an excellent rooftop gym and heated indoor pool, with views over the airport. One shower later, and I was back at the airport. 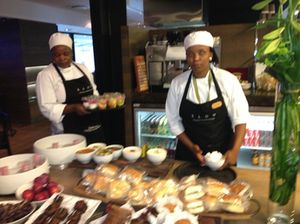 Airside, waiting for the ongoing flight, I relaxed in the SLOW lounge.  Where else in the world do you get live cooking in an airport lounge?  OK, Qantas lounges do, at least in Australia, but I do not think even Emirates or Etihad have chefs cooking there in front of you.  The SLOW lounges that I have seen in South Africa are outstanding and the guys and girls working them are so proud.  They consistently produce really good and healthy buffets, and lots of whole fruit (always so much better than cut-up bits). 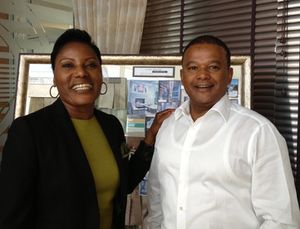 And so to Windhoek, and my new friends Haddis Tilahun and his wife Martha Namundjebo Tilahun.  He is Ethiopian, she is Namibian, they live in Windhoek, and the world.  Here they are standing in front of a display of fabric swatches and colour pictures in Martha’s office: it is the board she showed the architects and designers as she, to finest detail, knew exactly what she wanted their Hilton Windhoek to look like.  There is a picture of one of the many rooftop pools that she loves in Los Angeles, where they spend a lot of time. There is a cutting of colour displays, and a photo of tiles.  All eventually found their way into the Hotel That Haddis And Martha Built, namely the Hilton Windhoek. 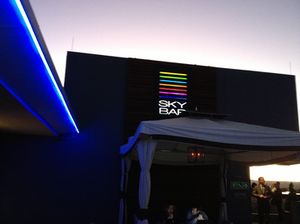 Sure enough, the rooftop of their hotel is the most wow thing in Windhoek.  It has a lap pool with deck around, and the Sky Bar, open to the elements, is the ideal place for cocktails and sundowners. There is something about an African sunset, its warm red colours uniquely making one feel at home, and this oh-so-modern luxury hotel fits in, surprisingly, just perfectly.