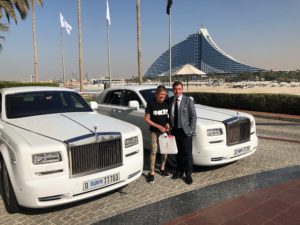 The iconic Burj Al Arab, on Dubai’s Jumeirah Beach, is consistently voted top luxury hotel in the world, and the gal wanted to see if it does simple things superbly.  Of course the driver sent for pick-up arrived conspicuously early, and the car happened to be one of the 202-room property’s six Rolls-Royces, all white. Although it was only a short visit there was not a single thing that grated or annoyed, and how often can any global traveller say that, not only about hotels but airlines and other forms of travel? Burj Al Arab, so often merely called ‘The Burj’, is actually a casserole of the most simple things of life that all add up to a recipe of perfection.  See the front of a welcome card, on the right.  How simple can you get?  Gold outline of the building + logo.  That is all. 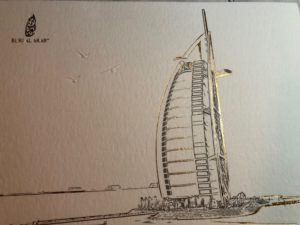 Of course it does help to have such an iconic silhouette, designed by Tom Wright and W.S. Atkins at the very end of the last century.  And how simple can a hotel’s beach bag be? Simplicity and style sum up this hotel’s new bags, designed and fashioned specially by Connolly London. How stylish this understated bag is: Connolly London, founded in 1878, is now run by Isabel Ettedgui, who bought the brand with her late husband, Joseph Ettedgui – Connolly London has fashioned the benches in London’s Houses of Parliament, and it produces leather seating for high-mark cars, including, incidentally, Rolls-Royces. See a photo of the Connolly-for-Burj bag, above.  Up there, too, you can also see a Burj burger, that simplest of foods, house style, here made with wagyu, and served with jalapeño and anchovy mayo. 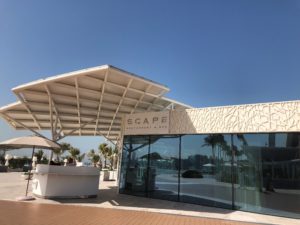 I was back at the Burj to lunch with the boss of this 202 all-suite hotel, Tony Costa.  In his few months here he has already introduced extra finesse+fun features – I have already written about the now-regular camel rides over the bridge that separates the Burj from the real world.  It is he who thought up the idea of the Connolly-for-Burj bags.  He cannot talk fast enough to share other things he is looking at, from taking the Burj out to the world to perfecting sleep even more. We were sitting outside at Scape, arguably my favourite of all the Burj restaurants as, being on its floating 12,000 sq m platform towed in from Finland, you can sit inside or out. 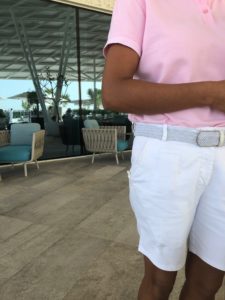 Like others lazing over lunch, we revelled in the glorious sunshine, and the equally sunny dispositions of the servers.  Love your uniform, I said to a young woman in pink polo shirt and white shirt.  We are changing them, she said. Why change them?  I asked Tony Costa.  We need better fabric and a better cut, he said immediately.  Luxury is always going one step better, preferably in an understated way.  Many diners at Scape will not notice if the fabric is improved but the wearers will, and they may well do an even more attentive job as psychologically their spirits will have been elevated.  One little thing leads to another and, eventually, to the title that this luxury hotel has, UltraTravel’s Best Hotel in the World, again and again.