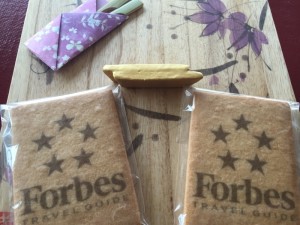 What makes a luxury hotel perfect is a question that the gal is often asked. Magazines sometimes come up with lists of the best hotels in the world. Sorry, but for anyone with even one percent of cynicism how can those writers know? Even someone who travels over 300 days a year cannot say anything is ‘the best’, but it is good, now, that Forbes is assessing quality levels. Aided by an advisory board which does include some great hoteliers – among them Maria Razumich Zec, who runs The Peninsula Chicago – inspectors have judged which are five-star hotels in some, but not all, areas of the world. One of the three Forbes five-stars in Tokyo is, justifiably, and totally independently of the advisory board, The Peninsula Tokyo. 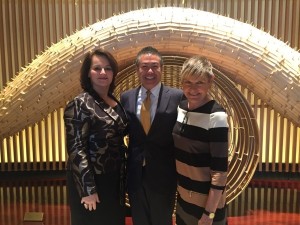 Newly-arrived GM Sonja Vodusek, who did such a brilliant job running The Peninsula Manila, and her right-hand man, Mark Kobayashi, who heads marketing, sales and many other things, are metaphorically jumping for joy. We all celebrated at Peter, the hotel’s rooftop restaurant, named for Peninsula legend Peter Borer. You walk in as if to a fashion arena, by way of a catwalk designed by Yabu Pushelberg. Look out over the twinkling lights of the city below, toast Forbes in Peninsula’s own Champagne, produced by Deutz. With the Gunma Jyoshu 40-day-aged Wagyu A4, of course a red is needed – Peninsula‘s own-label Pinot Noir 2013 La Cruz Vineyard Sonoma Coast is produced by Keller Estate Petaluma. 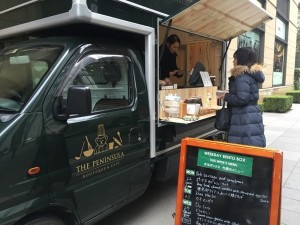 Luxury, the three of us decided, includes consistency, service and a sense of surprise. You get that here, constantly. They had brought in, far ahead of the March 5th launch, a veritable baby tree of flowering cherry blossom, from Gunma Province (did it arrive with the Wagyu, I wondered?). Suite 2001, looking straight down at the Imperial Gardens, also came with a selection of sakura, cherry blossom, sweets, namely red bean curd wrapped in a crèpe, a sweet bean jelly, and two mochi glutinous rice cakes. There is surprise, too, at the Pokémon game which, thanks to monitors set up around the 314-room hotel, takes you on a tour of some unexpected parts of the building. 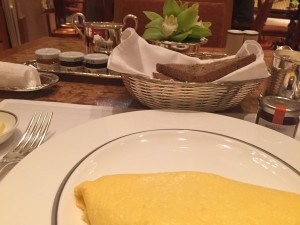 You can tour outside, too. The hotel has complimentary MINI Coopers, to drive around town, and three-wheeled scooters, for nearer journeys – both are, of course, Peninsula Green, like the official fleet of Rolls-Royces and BMWs (there are also ordinary bikes, but they are pistachio). I actually took a power walk, including round the rear of the building, to see how its bento box truck was doing, selling lunches to local office workers (it was doing just great). One essential at this luxury hotel, however, is having an omelette for breakfast. Yes, this morning, it was as good as ever, consistency at its best – see the video below to learn the secret. Forbes is on to a clever thing if it truly can deliver a list of what is among the best in the world, and so far it seems to be absolutely spot-on.