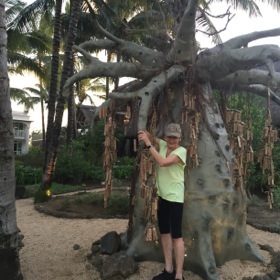 Some luxury hotels are so much fun, with so much going on, that the gal finds it difficult to know where to start. LUX* Belle Mare, Mauritius, is one such property, a venerable old lady who underwent a five-month botox in 2014. There was so much upheaval that some creative genius made a plausible baobab tree out of the debris. Hang a paper wish on it and you stand a chance of winning a free stay: at the wishing well next to it, throw coins down and you know you will be helping a charity. Around you as you stand there are masses of herbs, all carefully labelled. 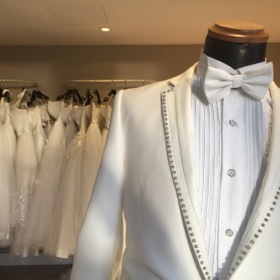 The wedding store has gear, to loan, for any size

Ashish Modak, who runs the hotel, showed me round. I loved the wedding store. They started out by having dozens of small-size white dresses, and complete white gear for guys, for Asian couples to be photographed at the resort, pre- or post- the actual wedding, wherever that was. But they have found that Europeans also want to be dressed up, for the same reason (yes, you have guessed it, they have had to buy in some literally enormous dresses to accommodate some outrageous girths). We continued on our way, walking to use, rather than save, calories. They have, by the way doubled the size of the gym, and it is outstanding, with latest Technogym Artis equipment and plenty of it. 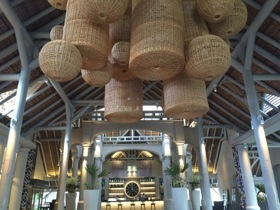 Looking at the coffee corner (one the hotel’s front desk)

When Paul Jones, the genius behind LUX* – OK, he will say he brought in branding specialist Piers Schmidt but it is he, Paul Jones, who has led the whole thing – came onboard, given the task of revitalising a really tired Beau-Rivage hotel, he quickly got rid of front desk-reception. What to do with the desk? Simple, if you are Paul Jones. Turn it into a coffee corner, and the room behind, known in the hotel trade as ‘back office’, is where they actually, really, roast all the coffee for the resort. But guess what is new, now? 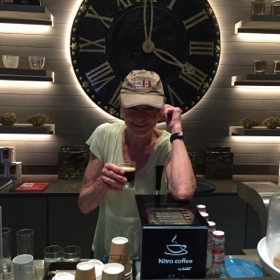 At the coffee corner they have added both a tea service, and a coffee press, and NITRO coffee. Hey, what is that? Well, apparently there are only eight such facilities anywhere. Nitro coffee is cold, pressed coffee passed through nitrogen and carbon dioxide. It is pulled, like a draught beer, and comes out with a pale brown foam on top, and it is absolutely delicious. I had a sip straightaway but then I had a whole glass at breakfast. Everyone around me looked in wonder, what was that extraordinary woman drinking? 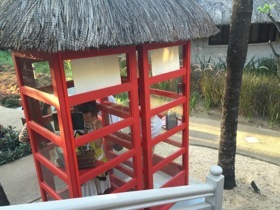 A few years ago, this was the only luxury hotel that I know that had a red London telephone box that worked – and it was such a success that now it has a twin. Why are they both so successful? Well, they have old-fashioned circle-dial telephones that, thanks to VOIP, allow any guests at this 174-room resort to call home, or call anywhere in the world, for FREE! How do you stop them mis-using it, I asked Ashish Modak? Well, he said, there is generally a line waiting outside (I took this photo about 6.45 a.m. while everyone else was still asleep) and, who cares if they do talk too long? It is amazing publicity.