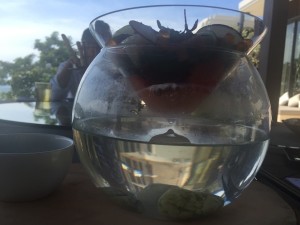 Fish in a bowl…

First impressions when arriving somewhere have the same effect as the interview process – the first 30 seconds count, a lot. The gal thinks of arriving at Vivanta by Taj Madikeri, in India‘s rainforest mountains. The car climbs, drops you off, you look through a building, open front and back, and over a fan-shaped decorative pool, steeply down to lush valleys, far below (more than one magnificent media man has said this is one of the world’s most memorable arrivals). Here, above, is another memorable arrival, at the Residences of Anantara Layan Phuket Resort, on the west coast of the island. 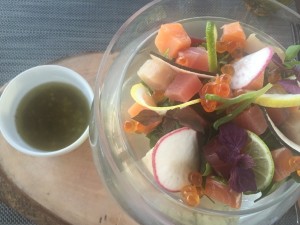 ..with ceviche on top

Go through the entrance, open front and back, look over a pool that is for swimming rather than mere beauty, and head immediately left to an outdoor sala, open on all four sides. Luca Mancini, the humorous – and talented – chef of this resort knows that I hate pre-ordered menus (thanks, Luca, for your understanding). The menu here is full of enticing things, but he does recommend his yellowfin tuna, Niçoise style. OK, I will go with that, but first I want your fishbowl. This is what I get. Yes, a real fish bowl, just like the ones goldfish swim round and round in. Here, however, the occupant is a Thai fighting fish, which apparently has to be kept apart from its peers, which does make me wonder how they manage to mate. This little fish has some rocks and lots of water. The top of the fish bowl holds a conical glass dish with ceviche, magnificent, glorious ceviche, with thinnest wafer-cuts of radish, and a dipping sauce. 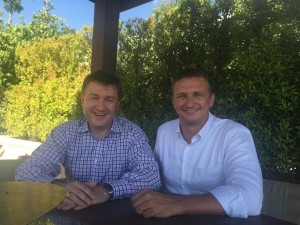 And then I get an enormous wedge-shaped fillet of magnificent tuna, cut in half and surrounded, on a real-slate charger, by tiniest green tomatoes, and half a quail’s egg, some anchovy cream and a couple of green beans. This is the most imaginative salade Niçoise since the heart of Nice, the Negresco. I am with two jolly hoteliers, Sascha Hemmann, GM of this hotel, and his very-English counterpart at Anantara Mai Khao Phuket Resort, Giles Selves, who does admit he always longed to be a fighter pilot but that would have been significantly solitary and he is definitely a people person. Sascha Hemmann, interestingly, was brought up in East Berlin: he was 14 when the Wall came down and his life turned upside down, immediately – there was no school as all the teachers somehow vanished. When classes started again three weeks later, there were all new teachers. 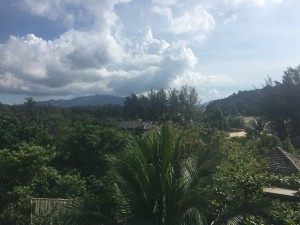 View from a spa room window

I am heading to this luxury hotel‘s Anantara Spa for a new Elemis face. The therapist, in cream gaucho trousers, wants to close the all-wall blind. No, I say, please let me have the view. Just as first impressions are so vital, so too are the last, and I must leave straight away after this. When I come back, by the way, Anantara Layan Phuket Resort will have started selling its 11 Residences, which can be freehold or leasehold, and put into the hotel’s letting pool. Each Residence has anything from three to four bedrooms and a big draw will be interiors by Jaya Ibrahim – plus the owners have access to this sensational main resort, its spa, and Luca’s imaginative cuisine.