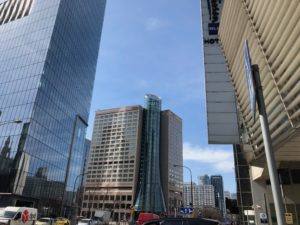 Looking at the 20-floor Westin Warsaw

Vodka at Westin Warsaw is firmly in the potato camp. Asked for something to accompany the gal’s tuna tartare with avocado, coriander, ginger, capers, aioli, pickled cucumber, the barman brought over a shot of Chopin (you can see piles of potatoes outside their headquarters, he said).  This is, and always has been, the hotel for time-short business executives, who want the luxury not only of a bar and restaurant right in the lobby but a location on Al Jana Pawła, handy for such national headquarters as Deloitte and EY. The 361-room hotel is only 15 minutes’ walk from both the city airport terminal, and the central station – get to Krakow in two hours, to Gdansk and the popular Baltic coast in four hours. 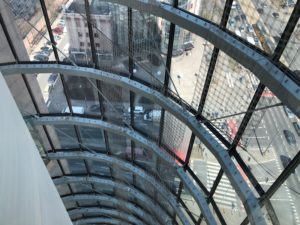 Looking down, inside the hotel

Outside, this 20-floor structure is a sculpture with a one-corner appendage of a glass tower, not quite vertical, that holds the three elevators.  Inside, that lobby is the hub of the building.  Ever since it was opened in 2003, by a Swedish construction company, it has offered a highly efficient product.  You know what you will get and it is done well. The Westin Workout gym is 24/7 and, bliss oh bliss, Technogym not only has sudoku and it works (question, is anyone ELSE heartily sick of newer Technogym features, starting with that annoying home page showing either a young woman in a sunflower sweat top or a grey-haired man, also Caucasian, who looks as if he has escaped from a cruise advertisement?  And when it comes to on-screen walks, I never want to ‘do’ Marin County or San Francisco I or II again for the rest of my life…). 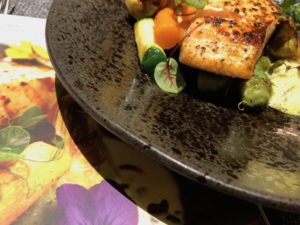 Westin regulars know to expect the brand’s Heavenly Bed.  Not having tried one for a long time, I do admit I slept magnicently, despite the fact that apparently it comes with a 30-cm pilllow-top.  I know this from the attractive Westin Home Collection booklet, which offers full, double, queen (mine) and king sizes, mattresses, linens going up to 400 thread count, and even hypoallergenic boudoir pillows.  There is no sign of being able to purchase a board-room table to seat at least ten, but then I was overnighting in #2017, the Presidential Suite. I am sure other occupants, too, appreciate the ten-foot (long) working desk.  I have, by the way, found WiFi outstanding everywhere during this trip to Warsaw, even in a 15 year old hotel like thi 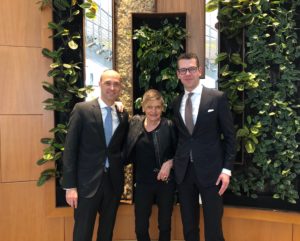 You also know what you get when it comes to food. SPG upper-tier loyalty members are offered such copious cocktail hour snacks in the 19th floor Club lounge that they can, and do, make dinner out of it. Down in Fusion, the lobby-set restaurant that operates nonstop from 6.30 a.m., there are apparently such popular specials as Sunday brunch, and a Friday night seafood buffet.  Other nights, the à la carte offerings are displayed in a full-colour book, Eat Well, that appears to be corporate.  What you see is what you get, says Michael Hopf, GM of Westin Warsaw whom I first met when he was in Raffaele Sorrentino’s concierge team at Berlin’s iconic luxury hotel, Adlon Kempinski. Sure enough, my delicious wild salmon with artichoke and more, including one nasturtium flower, did suitably emulate its colour picture. AND NOW SEE FIRST THE PRESIDENTIAL SUITE, THEN THE CLUB BREAKFAST