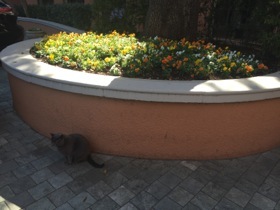 Let us think, fellow travellers, of animals associated with luxury hotels. In the UK, The Pig Near Bath has rare sheep breeds, and its newer sibling, The Pig on The Beach has chickens that provide the eggs that you can, if you wish, boil yourself, for breakfast. On the canine side, in Washington DC, Lord Monticello rules the roost, to confuse animal life, at The Jefferson, the Preferred hotel where Obama hosts many private meetings. In Boston, Catie Copley, the black lab-with-the-most, presides over Fairmont Copley Plaza when she is not busy either writing new books or keeping up her blog. In Dallas, Duncan was adopted to be house cat of the luxury Rosewood Mansion On Turtle Creek hotel. The only problem, says the gal, is that, once established, Duncan proved to be female…. When Karl Lagerfeld came to stay he brought his cat, Choupette, who loved c(h)atting to Duncan, apparently, and probably tweeted it to the 46,000 Choupette followers. 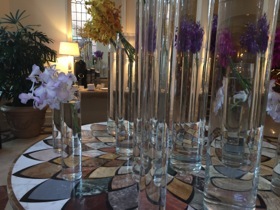 Flowers in the lobby…

Actually this is a pretty, and I use the word on purpose as this is a beautiful hotel, place . The hotel was made famous by silver heiress Caroline Rose Hunt, who adapted the 1923 mansion (hence the name) that cotton baron Sheppard King had built in 1923 to replace an earlier house razed by fire. Sheppard King made his place instantly historic, with 19th century doors culled from Spanish cathedrals and original moulded ceilings pulled from all over Europe. Caroline Hunt added beauty (way back at the end of the last century this was the 143-room hotel that gave you pink bed linens and Lady Primrose toiletries). Now, as Rosewood (from her name), you have white linens, Natura Bissé toiletries – but still sensational flowers. 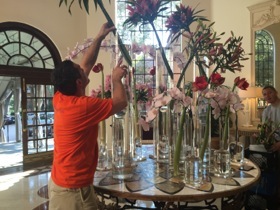 The lobby’s flowers are tweaked daily. Despite the influx of new hotels in Dallas, Rosewood Mansion on Turtle Creek continues to attract the great and the good of Texas, with nearly half of all those staying here being repeat loyalists (perhaps some come to see Duncan?). They come back, even after some time away, and head to the restaurant where captain Hugo Reynosa, who has been here since 1991, remembers them instantly – he is so famous he is mentioned, by name, in the fascinating The Mansion on Turtle Creek Cookbook, Haute Cuisine Texas Style, which has a foreword by Dean Fearing, the face of Lucchese whom Caroline Hunt brought in as her first chef. 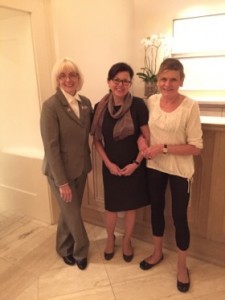 With the exception of Dean Fearing, who dared to move on to another establishment, the 250 lovely people who run this place certainly stay. Head of ‘people’, also called HR, has been here since the hotel’s opening, 35 years ago. The Chief Concierge, Mary Stamm, has clocked up over 30 years. The luxury hotel’s MD, Andrea Gates, was studying business in school when she moonlighted in hotels, and found she loved interacting with people. She learned systems with Hilton and Kempinski before being recruited to this very hotel in 1992 – and, having stuck with Rosewood throughout, she returned in 2013 as Big Boss.