At that super-luxury Peninsula Tokyo, wedding couples stay the night beforehand (they are already legally married). On the day itself, they go out of a back entrance of the hotel, are helped into one of the hotel’s gorgeous long Rolls Royces – Peninsula green of course – and driven around to the front entrance, to parade in through the lobby to general applause.  Typically there will be around a hundred guests.  As the gal found in Osaka, the wedding dresses (plural, because she changes her gown) will often be rented from the hotel.

Still thinking of Tokyo, for anyone getting married on May 22nd an ideal party venue is SENSE restaurant at Mandarin Oriental Tokyo.  This luxury hotel is celebrating that day’s ceremonial opening of one of the world’s tallest towers. The Sky Tree is 634 metres high, and supposedly cost 63.4 billion yen to build.

At SENSE, you can buy the whole restaurant that night so that 64 guests can have magnificent views of the celebratory fireworks.  The evening comes with a vegetable carving that is 6.34 metres long (a carrot?  my goodness).  There are mooncake desserts and chocolates, all 6.34 centimetres across.  The entire menu, which is six courses, includes a whole grilled suckling pig.

Thinking back to weddings that have been truly memorable, backs of dresses spring to mind.  Top of the list is probably, worldwide, the rear view of Kate Middleton’s chief bridesmaid, her sister Pippa, wearing the white dress that glided up the aisle of Westminster Abbey last April 27th.

It was designed by Sarah Burton, the hitherto unknown and shy designer who has so brilliantly stepped into the shoes of the late Alexander McQueen.  How one backside can make a celebrity (wow, Pippa has an advance for about half a million dollars for a book on parties, for heavens sake – can she write?  of course she can, she went to Marlborough College, England, where someone-you-know worked for a time).

White art, hanging outside, ready for the Bolshoi Ballet or Martha Graham or a wedding dance

The backside dress shown is by an unknown designer.  It was worn at a wedding on Vieques, which is a place no-one in their right mind would choose, and no-one would attend unless they really love the bride and/or the groom.  Hard to get to (a mini-plane maxi-expensive occasional air shuttle from San Juan, if you must).

Brides today wear the most amazing garb.  In Istanbul a couple of weeks ago, as we chugged along the Bosphorus from the gorgeous Ciragan Palace Kempinski, we saw wedding parties at restaurants along the shore with the brides wearing green.

Daffodils in an English wood

There is a trashy TV series on in the UK right now called My Big Fat Gypsy Wedding where the poor dears are squeezed into constructions that cost around $75,000 and the corset bones are so tight and stick-in they need to wrap their bodies in bandages before squeezing in.

Come to think of it, this white artwork would make a much more free-movement, dance-to-the-wind dress, a kind of Isadora Duncan thing (but look what happened to her, she was self-strangled by her long scarf).

Dancing fish, with chips, at The Old Granary

Yes, the girl is home for a day, to appreciate some reality.  Luxury hotels promote experiences more and more, and charge a fortune for the treat.  Nothing beats flowers of the season, and going to an English pub for some of the best fish and chips in the world (others will say they are in Bay of Islands, on New Zealand’s north island – any other contenders? Send’em in).

I love the fish, which seems to dance with its  chips at the Old Granary, somewhere in Dorset, a few miles from the Jurassic Coast that you can read all about in the latest edition of Patricia Schultz’s  1,000 Places to See Before You Die. You eat on wood tables, service is fun.  Love the stack of logs ready to fuel the real working fires. 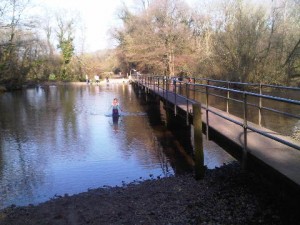 Dancing, aged five and a half, through a ford, England, March 2012

Every day brings a new experience.  Cycling down to a local ford, we saw this little girl (I am five and a HALF she said, perfect elocution).  She dared to walk all the way across the wide river.  Her brother would not come as he thought there were crocodiles.  She will go far, that girl.  Watch out Hillary Clinton, Angela Merkel and Indra Nooyi.

Got to laugh. Just been reading a sample of Double Dactyl poems (‘a devilish amalgam of rhyme, meter, name-dropping and pure nonsense’).  See The Spectator magazine, March 10th, 2012.  Here is one.

Hot from dancing in the Caribbean with his new blue shoes, he headed straight on for Rio de Janeiro to entertain, and be entertained.  No, he is not staying in the Copacabana Palace or Hotel Fasano  – he is, somewhat suitably for his family name, in the Hotel Windsor. And now, gal, time for YOU to get back to luxury hotels.