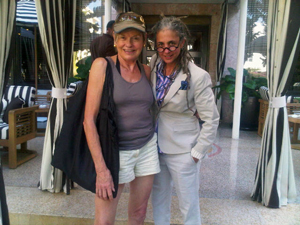 Off the ship, gal – and within an hour there I am at The Raleigh, one of Miami South Beach’s most fascinating luxury hotels (which says a lot).  For a start, it opened 1940, in that period of high growth in South Beach Art Deco construction.

Its architect was the famous L-for-Lawrence Murray Dixon. I am greeted at the hotel’s entrance by Crispy. a real character from Massachusetts who gained her nickname when doing props in theatre, and she looks after me just as she looks after everyone else.

Pots, arranged by Mark Cunningham (the stairlift in front is so invisible it looks like part of the 'art')

During the annual Art Basel Miami Beach, for instance, she has brought big names here, to take over the hotel’s sandy Oasis, beyond the swimming pool (and backing on to the beach walk).

Another fascination is that the hotel’s interiors, 2012 style, are by long-time Polo for Ralph Lauren designer Mark Cunningham, who has never done a hotel before. 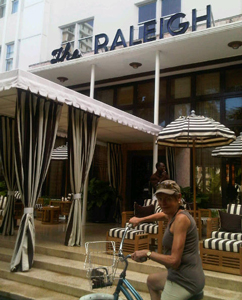 Setting off on a hard-to-control city bike

Exercise calls. There are a pair of Vespas, one strawberry icecream and one buttercup yellow, and 4 wide-tyre city bikes, with antler-shaped handlebars, no gears and back-pedal brakes.

I take one of these, east along 18th Street to the miles-long beach walk, and the bike’s metal basket promptly falls off as I bump up on to said tiled ‘walk’.

Back home to check out the pool.  I go out to the rear wood deck, and down six steps to the open bar, which has seven tall stools with backs.

The simplicity of its white-painted back wall, with shelves for full bottles, complements a counter display of clear glasses holding orange segments, mint sprigs and so on.

Beyond is the 1940 pool, described as Busby Berkeley-esque after the Hollywood choreographer who favoured maximum complexity.  Think of it as a fluted Arabesque, some 90 feet long, surrounded by a metre-wide shallow moat.

At the far end what is now an ice-blue concrete fountain was originally a full ten-step fixed diving board, and beyond this is the 1940-original two-floor lighthouse, with round windows (in those days it was right by the narrow beach, now it is 450 feet away as the land has built up considerably).

As dusk falls I look, from the outside gym, over a retention wall to the rooftop-lit Shore Club

The area beyond, a few years ago the Aqua Cabana Club, is now the aforementioned sandy Oasis.   This is where such titans as Larry Gagosian, Architectural Digest, Tiffany and many more hold parties during Art Basel.

This is also where the gym tent sits, with all of three LifeFitness pieces.  I work the elliptical as the sun goes down and I can look across to neighbouring hotels, the Shelburne, the Shore Club and Tiffany’s.