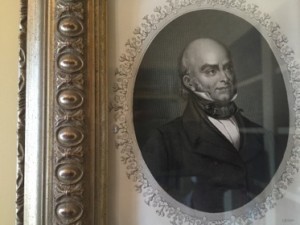 Having gone on at length about Thomas Jefferson, and to a lesser degree, John Quincy Adams, it is important for the gal to stress that past Presidents have had such an effect on Washington and its luxury hotels – and on the rest of the USA. New York‘s main airport is JFK. Nebraska‘s capital, Lancaster, was renamed Lincoln, though it remains in Lancaster County (this is a city, by the way, of mere 2.2% unemployment). Wisconsin‘s capital was named Madison by a former judge, James Doty, who subsequently named streets after the other 39 who signed the U.S. Constitution. Back to the nation’s capital: what will D.C. call after Barack Obama? There will presumably be at least one statue of him. 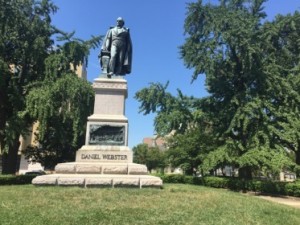 One of my favourite statues in the city is that of Daniel Webster, in Lafayette Park – you can see it from some of the windows of the Hay-Adams Hotel. This is the Daniel Webster who was, during the period 1841-1852, Secretary of State for three Presidents, namely William Harrison, John Tyler and Millard Fillmore. I have actually run past another statue of Daniel Webster, by Thomas Ball, at the north-west corner of the southern circuit run in New York‘s Central Park. When trudging past, I always paid obeisance to the genius I thought was the Webster of Webster’s Dictionary & Thesaurus. Now I find out that the wordsmith was actually Noah Webster, 1758-1843, a Yale graduate who turned to writing after a private school he set up failed, and a romance broke down (he later went on to father eight children). 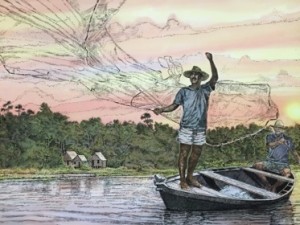 Fisherman at the National Geographic Museum

Back to Washington DC. Since I was passing the National Geographic Museum and had a few minutes to spare, I went in and coincided with an exhibition on fish. One of the backlit prints, showing the fisherman, had beside it an excerpt from Theodore Roosevelt‘s Through the Brazilian Wilderness, 1914. ‘The doctor had seen one of these monsters which had been killed by the two men it had attacked. They were fishing in a canoe when it rose from the bottom and raising itself half out of the water lunged over the edge of the canoe at them, with wide open mouth’. President Roosevelt had been exploring the Brazilian jungle 1913-1914 with Colonel Candido Rondon, as a result of which the trip became known as the Roosevelt-Rondon Scientific Expedition. Also along was 25-year old son Kermit Roosevelt, named for Mrs Roosevelt’s middle name (tragically, unable to live up to his father’s reputation Kermit Roosevelt, a Harvard graduate who served in both World Wars, fought depression and alcoholism and shot himself June 4th, 1943). 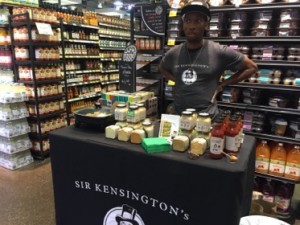 To happier things. Almost as an escape from luxury hotels I love going into local supermarkets, which for me in the USA means Whole Foods. My ‘local’ in Washington DC is the one at P Street and 14th, and there was a pop-up booth offering tastings of Sir Kensington‘s. This apparently is a brand of mayonnaise and other sauces produced with 50% less sugar than alternatives, and I first heard about it from James McBride (you can be sure Sir Kensington‘s is on the menu at Nihiwatu, the luxury island resort off Bali that James McBride co-owns with Chris Burch). It is somewhat hilarious that, according to the website, Sir Kensington (Sir WHAT Kensington) studied at Oxford, taking three degrees simultaneously, namely mercantile trade, agronomy and culinary arts (really, at OXFORD?)