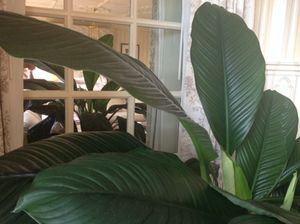 Aspidistra, all of six feet high

Every household, and the gal presumes every hotel of note used to have aspidistras a century or more ago, and reading about them one can see why. They are very tolerant of neglect. Great news for householders who forget to water, or talk to their house plants. What is not known is why on earth John Ker Gawler named the genus Aspidistra, way back in 1822 (he could have called it so many things). What is known is why the luxury Hay-Adams hotel is so called: the 143-room hotel replaces two neighbouring houses here, owned by Lincoln’s assistant John Milton Hay, and his friend John Adams, son of Quincy. 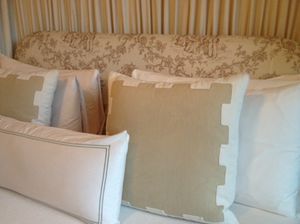 Soft colours (and ‘the’ fabric on the bedhead)

Today’s designer, Thomas Pheasant, has really followed the guidelines of the 1928 structure, by Turkish-Armenian architect Miihran Mesrobian, who also did the nearby Carlton St Regis. Thomas Pheasant has complemented Hay-Adams polished oak woodwork with all-cream moulded ceilings, as in Elizabethan times.   Room 504, looking south to the White House, is absolutely calming. The aspidistra is surrounded by hundreds of yards of fabric, with soft Chinese figures and foliage in milk chocolate, on a white chocolate background. The fabric forms full-length curtains and pelmets, it lines the doors of the cabinet that holds television, safe and minibar, and covers the bed base and its half-tester back. 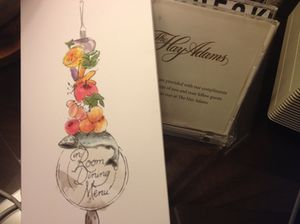 I am really amused by the room service menu. It is so cleverly simple. It has everything most could possibly need, all in one four-fold card. Sections are Sunrise, Mid-day (11.30 to 10.30 at night), Sundown (5.30-10.30) and night-time Twilight, 10.30 to 6am. It sensibly has all listed wines by the glass or bottle, say Taittinger at $20 per glass or $90 for the bottle. There are also half-bottles. I did think about trying a Washingtonian, namely Absolut Citron with Limoncello, Chambord, and a frothy sour blend. But then I decided not this time. 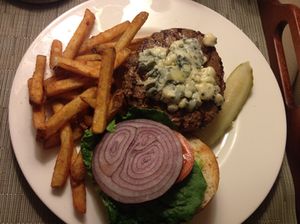 This is what I ordered, and got, an all-American hamburger, choice of cheese. No salt on the fries. While I ate it, oh so elegantly, I thought of the time I was trialling the burger that United was at one time offering kids in the air. When the meal service began, I got a quite delicious burger and a glass of milk and my neighbours either side got – zilch, unless you pay for it. This luxury hotel’s burger, by the way, is superb, and excellent value, and they sent up a bottle of Fiji water with their compliments.