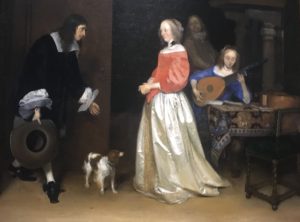 A genre painting that balances well with the one above

It is always for a tonic for the gal to return to the USA, especially to its eastern seaboard, to discover that current global perceptions of that great country are not always 100% accurate. Various examples of this will become apparent as Girlahead visits some of the nation’s capital’s luxury hotels over the next few days. Global media might make you think that free time is devoted to watching sports, shopping, eating far too much and such bad-for-you hobbies, and addictions, as gaming. In fact, an important minority reads the superb New York Times, which leaves the UK’s highbrow newspapers in the trash, and covers every concert and gallery happening it can. 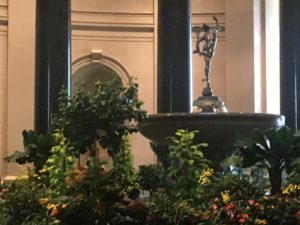 While waiting to get into the exhibition…

Right now Washington DC’s National Gallery of Art is showing Vermeer and the Masters of Genre Painting, and although it has been running for five weeks, and will do so until January 21st, 2018, it still attracts at least 2,000 visitors a day. I was there at 10 a.m. precisely, for its opening one day, and still had to progress through ten different holding sections (as at Disney, you always think the next holding pen would be the last). Yes, the exhibition included such Vermeers as The Louvre’s Lacemaker, the Gallery’s own Woman Holding a Balance, and its Lady Writing, but what was so fascinating was the similarity, and influence, of similar paintings by Gerard ter Borch (Royal Picture Gallery Mauritshuis’ Woman Writing a Letter) and Nicolaes Maes (National Gallery of Canada’s Young Woman Making Lace). 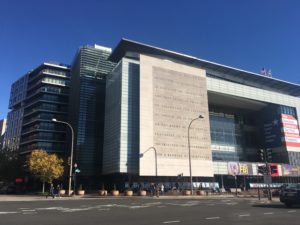 .. and on exiting, look across to the Newseum

I also loved the way similar paintings could be viewed together. It is worth noting that this exhibition, organised by the National Gallery of Art working with the National Gallery of Ireland, Dublin, and the Musée du Louvre, Paris, is free, with no charge for entry or the full-colour programme. Big thanks must go to the main sponsor, BT, and other supporters, including the Exhibition Circle of the National Gallery of Art – illustrating how America’s museums, just like its schools and colleges as well as its PBS broadcasting, are all financially supported by followers.   There was also an indemnity from the Federal Council on the Arts and the Humanities: I do wonder if the President knows federal money is being spent in this way although he should approve, since so many of his own followers have supported the newest of the myriad of museums in this lovely city. 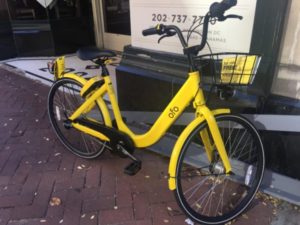 The Museum of the Bible, which opened November 17th, 2017,  was funded to the tune of $500 million by Oklahama City-based Steve Green, president of the 800-store Hobby Lobby quilting and other crafts chain, was opened with an 800-person gala dinner ($50,000 per table) at the city’s stunning and gorgeous new luxury hotel, Trump International, of which more anon. There are so many museums in this culture-rich city, which I also love for its excellent public transport. As well as city-operated bikes to rent from fixed stands, Chinese companies are also making an impact, offering bikes that are activated anywhere, by scanning machines’ QR codes, and dropped off anywhere, and not littering the scene – yet.