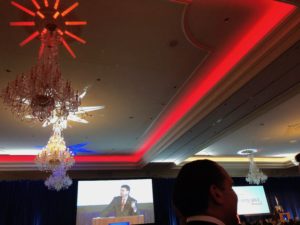 Patriotic lighting in the Presidential Ballroom

The thing about Trump International Hotel Washington DC is that it simply wants to be the best.  It HAS to be, says its MD, Mickael Damelincourt. The night the gal was there the 263-room hotel was full, with hotel guests, and others in to eat, or drink, or meet. There was also a veterans’ gala dinner in the Presidential Ballroom, a new glass structure that connects to the main building (above). Originally finished in 1899, the historic part of the hotel complex was the city’s main post office, a nine-floor open square. Now that central space has been covered over, to form a glass-roofed atrium, nine floors in all. 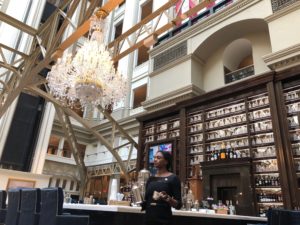 One end of the lobby

When Damelincourt first saw the square lobby, which must in all be 180 yards along each side, he was, he admits now, just a little over-awed at the thought of how make such a ‘stage’ work, theatrically. As director he has produced a play that is continuously full of action (and he plays a starring role by using one of the lobby lounge tables for much of the day). At 6.30 a.m. I saw business people standing as a group, having coffee before a formal breakfast meeting started. I actually breakfasted in the lobby lounge, looking up at a Star Spangled banner hanging high above. They are really flexible here, bringing my omelette while the next table chose all the patisserie goodies they wanted from a shiny wooden cart, with a barrel-vault glass top and brass handles.  All afternoon there are tea-takers in the lobby. 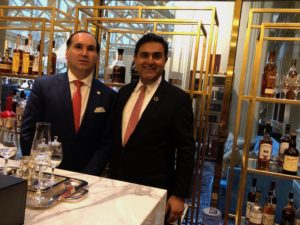 Mickael Damelincourt, left, and Daniel Mahdavian in the Experience Salon

In the evening the lobby bar has competition from The Experience Salon, one of two glass-sided rooms set in the lobby – the other is a Brioni boutique.  The Experience Room is the idea of Daniel Mahdavian, who heads restaurants and bars and has assembled what must be a priceless collection of old and rare spirits and wines.  Book a three-bottle set tasting here for, say, a choice of US red grape varieties, Can from Napa, Cabernet Franc from Virginia and Pinot from Oregon, or three one-ounce Macallan pours, 12, 12 Double Cask and 18 years, both alternatives at $150 per person ++. Daniel Mahdavian’s most lush experiences he has sold recently are four, one-ounce pours of the Dalmore King Alexander III and the Dallmore Constellation Collection vintages 1966, 1979 and 1999 – and The Macallan 23, 30, 40 and 50 years (both flights came in at $3,500 per person ++). His most exclusive bespoke pour, however, is a complete line-up of the best American Bourbon made by Pappy Van Winkle from Kentucky. He will not say how much it costs to enjoy a five-vintage taste, 10, 12, 15, 20 and 23 years. Alternatively design your own tasting and let Magician Mahdavian do the rest.  This is really a most imaginative use of this glass-walled space, and it does not hurt that others, outside in the lobby-proper, can see in. They undoubtedly wish they were in the happening too. 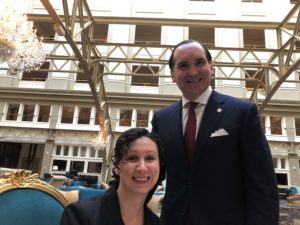 There are so many creative people contributing to the unique features of this 263-room hotel. The food team lays on a mega-dessert buffet in the lobby every Friday, which has local kids clamouring at their parents to go along, as a family.  During my too-short stay I met up with Evonne Miles, who heads training here while at the same time doing an eLearning MBA.  I was impressed by her respect and analytical support for her 35 room attendants, what other nations still call maids. New recruits are, like all inductees, treated as guests for the first two days, after which they have extensive professional training: they must quickly know every wish of a room’s occupant, said Miles. She also astounded me by saying that my divine luxury suite – see a video below – could, when I checked out, be turned over in a couple of hours, by a team of three or four.  I wish I had seen that! NOW SEE FIRST MY SUITE AND THEN THE TASTING SALON