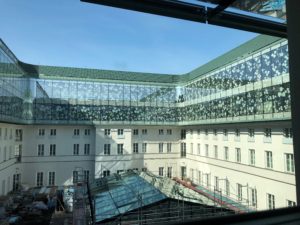 Looking into the central courtyard

Soon there will be yet another vodka to try – Raffles Europejski Warsaw will have its own special blend. Chopin is creating a bespoke blend, with a hotel-specific label, apparently (this luxury hotel brand already has its own gin, produced by Suntory Beam-owned Sipsmith, who, as the gal has already recounted, bought it from its two creators, one a direct descendant of Sir Stamford Raffles). Well, the big question is, of course, when EXACTLY does Raffles open here in Warsaw? No precise date has been published but advance notice went out last week and, judging by a tour a few days ago, it could easily accept its first guests from mid-May 2018. 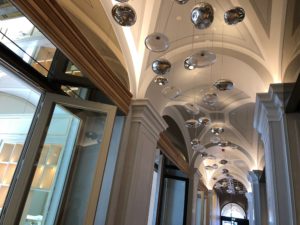 Looking up at the main hall…

I was so lucky to be shown round. Soon, when you enter the main lobby you will be greeted by vertical floor-standing sculpture-lights, flickering like miniature Eiffel Towers. The three-floor building is an open square, around a courtyard that will have a conservatory restaurant surrounded by garden. Some of the inward-facing ground floor rooms will open into private garden-terraces, which should appeal to smokers.  There are still reminders everywhere of the building’s history, which goes back to 1857, but see how original spaces have been brought into ageless modernity by skilful use of natural materials, predominantly Polish oak and the various-greys marble that line most bathrooms.  In some, as in the photo above, different greys form mosaics of Warsaw’s Old Town skyline. 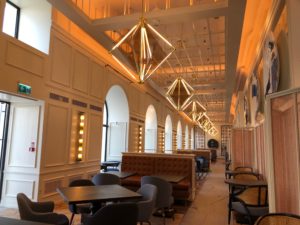 .. and along the restaurant

History is also illustrated in alcoves leading off upper corridors: each alcove is a reminder of a different stage of the hotel’s past, with suitable furniture.  Obviously the present owners, led by a Swiss family who are great admirers of Raffles Singapore, worked closely with the designers, who are Barcelona-based Lazaro Rosa-Violan, of Studio Lazaro Rosa, and, from Poland, WWAA, led by Marcin Mostafa and Natalia Paszkowska.  Honestly, it is all beautiful. The 88-seat all-day Europejski Grill has, along its main wall, just visible on the right of the photo here, are eight metre-wide blue on white show plates.  A coat storage for people coming in from outside, by the way, looks like a tall chest-of-drawers, but then a whole-half swings open to reveal the hanging rack. 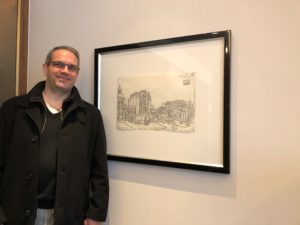 Europejski was originally designed by Enrico Marconi for the Przezdziecki family, who still have a minority interest.  Over the years it has variously been a military academy and an Orbis hotel.  It has never, however, had such glorious rooms as the Raffles Suite, 3,000 sq feet with its one bedroom, to which a further three can be linked. I last saw GM Thomas Guss at Shangri-La in Abu Dhabi.  Why move here, I asked? It was an opportunity he could not refuse and this will be one of the best hotels in Europe, he promises. There is a cigar lounge with hundred year-old carved ceiling, and a six-room spa which will use Polish-owned Sisley products, and yes, it will have a pool.  And that vodka.