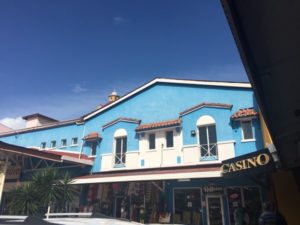 Colón’s casino, part of the Radisson

Panama, or at least Colón, the city at the Caribbean end of the canal, is a bit of a dump. The nearest contender to a luxury hotel for this city of about 80,000 is Radisson Colón 2000 Manzanillo Bay, which towers over the cruise terminal. The gal needed some nail-care bits and pieces and discovered that the hotel is part of a massive multi-colour complex that includes a supermarket – but the nail goods were all mixed up, with no prices – and a casino. But cruise ships stop in Colón principally to see the canal, of course. 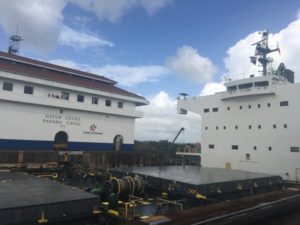 Ship goes through a lock…

And our tour was fascinating. First we went to Gatun Locks, seven miles from the ship (but it still took an hour to get there as Colón’s square-grid town layout has no stop signs, traffic lights or police at intersection,s so it is a free-for-all). By contrast the canal is brilliantly organised. The new locks are barely working, taking only six ships a day on average – they can take ships of 366 by 49 metres. The old locks work 24/7, taking ships up to 294 by 32.3 metres, each escorted by a Spanish tug, built at a cost of $11 million each, and each tied on, two fore and two aft, to dinky little Mitsubishi cog-wheel engines that are mended, on the spot, as necessary. 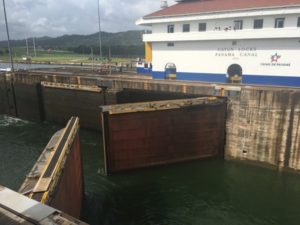 .. and then the gate closes

We watched an enormous grain carrier, the NBA Monet registered in Valletta, go through before the gates were closed, and then, before getting back into our bus, our tour guide Ariel pulled out a vanilla muffin which immediately attracted, honestly from nowhere, half a dozen coati-mundi, hog-nosed coons that are part of the raccoon family. Then it was back in the bus, to head for our morning exercise, namely a 90-minute kayak expedition. Now I must explain that I have ever, ever, kayaked before – see the preparation, above. One near-professional in our group said dismissively that these kayaks were Tupperware, toytown substitutes. 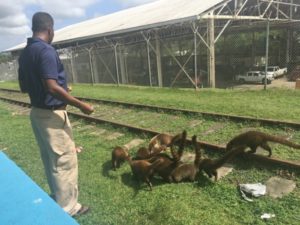 Who cares. I was in front and a young lady from Sydney was behind me (I am sure that she was paddling even harder than me). But we survived, without capsizing, and we paddled round the lake that had been part of Fort Gulick, one of Panama’s former US Army bases that has now partly been turned into Meliá Panama – a really utilitarian hotel, apart from its lovely outdoor pool. Afterwards, we were offered the vanilla muffins that had not been donated to the coati-mundi, and ‘nosed’ back through Colón’s traffic, past the casino and the Radisson, to real luxury, namely Seven Seas Mariner.