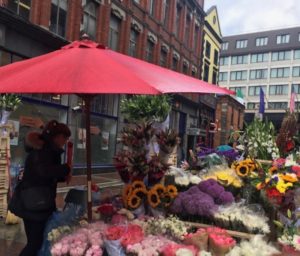 From Grafton Street, look at the hotel

Honestly, says the gal, if you want to be right in the centre of Dublin life, within a few minutes of day-time culture, any-time shopping and nightlife at Temple Bar, then The Westbury is the luxury hotel for you. As you can see, left, the L-shaped hotel is only a short walk behind one of the pop-up flower sellers on Grafton Street, which makes carrying your purchased loot from Brown Thomas, or Levi’s, Marks & Spencer, Monsoon, Swatch, Victoria’s Secret and the rest, really easy. And if you head out for the evening, the Temple Bar, Vintage Cocktail Club and dozens, if not hundreds, of other drinking places are not too far away. Mr PV Doyle, who built this six-floor hotel in 1984, must have been a soothsayer in knowing what would bring the most profitable return on each square foot of land in this part of town. It is The Westbury that was the inspiration for what is now the family-owned Doyle Collection, which has three hotels in Ireland, four in England and one in USA. 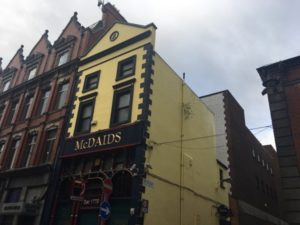 The hotel is buzzing, with business types during much of the year and with tourists, many from the US, summer-long – the hotel benefits from membership both of Global Hotel Alliance GHA and Leading Hotels of the World. This business makes it an attractive place to work, and youngsters here are really passionate. I was looked after by two such enthusiasts, both of whom will be GMs in as few years as it takes to count all fingers. Jack and Rory were absolutely brilliant (how thoughtful to put all the ingredients for a do-it-yourself spa experience into room 444). This is an ideal place, by the way, to see the locale: I looked directly across to Jack Wills male fashion gear, and just to the left to McDaids. This yellow building was apparently, in the late 18th century, the city morgue (is it true that corpses were stored standing up?). It then became William Daly’s Bar, until one John McDaid bought it in 1936. 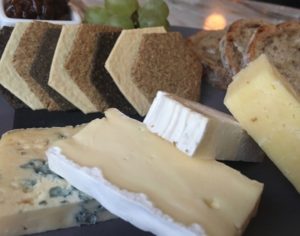 But let me concentrate on the buzzing hotel that is the wonderful Westbury, wonderful for its location, and for its people, and for its eating and drinking. This is the place, I thought, to try a real Irish breakfast – see the photo at the top of the page. An Irish breakfast differs from an English breakfast in having both black and white puddings, and some also want fried bread. It should be eaten with soda bread, and the jams must of course be Irish – these are from Abbeyleix in Co Laois, about an hour’s drive from Dublin. I had dined marvellously in WILDE – named for Oscar, of course – the previous night, off a 28-day grass-fed 300-gram bone-in ribeye, with a smoked steak sauce and oh, so memorable, a side of roast cauliflower florets with pomegranate seeds (delicious combination – try it). We finished with Irish cheeses, from left in the photo, Cashel Blue, Cooleeney Brie, a goat cheese (from Spain) and Hegarty’s Cheddar. 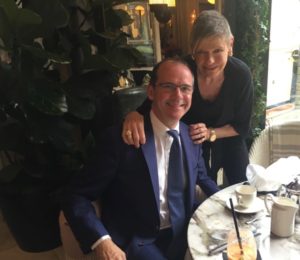 WILDE leads off the main lobby, which is 18 carpeted stairs up from the street – the lobby level also has the Gallery, the place for afternoon tea, any two hours between 12.30 pm and 5.30pm, after all that shopping and/or culture (favourites on the three-tiered tea stand are the éclairs on the top tier). Down at street level, Balfe’s is open to Clarendon Street one way, and Harry Street the other, and a big slate menu on the wall suggests guilt-and-gluten-free fish and chips with onion rings, and perhaps a rose fizz, namely syrup, lime juice, egg white, soda water – and gin. Honestly, I cannot get away from gins in the luxury hotels I visit these days! But it is marvellous, too, to see how healthy you can be, here at The Westbury. I notice that Doyle Collection’s CEO, Pat King, resists the ‘full Irish’ at breakfast. While I started with Elle Macpherson’s Super Elixir WelleCo Boosting Berry Smoothie (almond milk, frozen berries, banana, date, super elixir vanilla nourishing protein) he simply chose a carrot health drink and porridge, made with water. NOW TOUR MY ROOM, BELOW