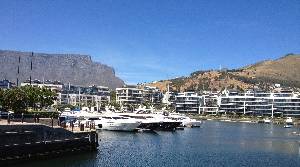 The Marina, with Table Bay to the left background

Let’s take a walk from Cape Grace, the luxury hotel in Cape Town that was base for many of the delegates at last week’s Leading Hotels convention.

This is intelligent-Brits’ favourite city, anywhere, at the moment, and the sun shone throughout our stay (the city has 283 days of sunshine a year, and the only notable rainy months are April through to October, but never more than 100 millimetres per month – if you are not happy with the Cape Town weather, says my friend Sherwin Banda, just wait ten minutes).

The Central City of Cape Town is very keen to push it assets. A crossroads of the latest global ideas, say Rob Kane and Tasso Evangelinos, Chairman and COO respectively of the Central City Improvement Board.  The gal comes out of her hotel, looks across the water at Table Mountain, rising to its flat surface 3,500 ft above sea level. 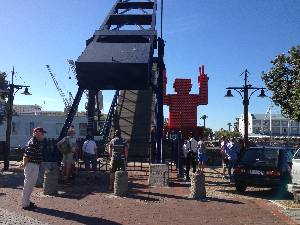 Cape Grace is on West Quay of the V&A Waterfront.  I head west and meet up with lego man, a sculpture by Porky Hefer that is 55 feet tall.  It is made completely of Coca-Cola crates, which apparently will be recycled once it is taken down but since lego man has been here at least since July 2010, for the World Cup, he looks like he ain’t movin’ soon.

He provides a continuous backdrop for family photos, especially while you are waiting for the bridge to open to let tall-masted ships ply between the marina and the Alfred Basin, the one opened by Queen Victoria’s second son. 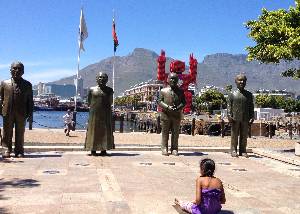 Next I come to Nobel Square, dominated by lifesize statues, by Claudette Schreuders, of the four South African Nobel Peace prize winners.  From left to right, we have Chief Albert Luthuli, Archbishop Desmond Tutu, F.W. de Klerk and Nelson Mandela. Luthuli, or Lutuli, 1898 – 21 July 1967, was President of the African National Congress.

He was the first African to win the Nobel Peace Prize, in 1960, and he died in an accident seven years later.  I once sat next to Desmond Tutu (1984 prize winner) on a flight from Cape Town to Zurich, and he chattered absolutely nonstop (he was on his way to Davos). De Klerk and Mandela jointly won the Nobel prize in 1993. 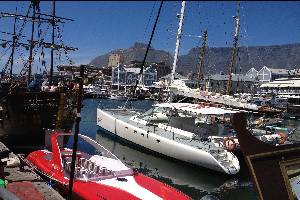 A variety of craft, including wooden 'old style', await

The walk continues, to the old warehouses that have been turned so brilliantly into craft sheds, boutiques and restaurants. One place advertises the best fish and chips in the world, from 0730. Friendly touts try to get you to invest in a helicopter ride, or a boat trip.

There are all kinds of craft going out, from dragon boats with teams of teenage schoolgirls at the oars, and diesel boats taking entire families of black-veiled visitors from the Middle East. There are fishing boat, and sunseekers.  Some prefer wooden craft made in the style of seafarers centuries back. 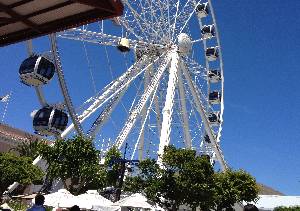 The Ferris wheel was installed for the 2010 World Cup

The Ferris wheel was opened July 2010, for the World Cup – it has 36 cabins and takes 20 minutes to do a circuit. As with the lego man, the wheel was intended only to last six months but it similarly looks as if it is a permanent fixture. An ample women makes bright day-glo pink candy floss cotton at its base.

I pass the Two Oceans Aquarium, which offers over 3,000 animals, fish, birds and frogs, all alive and waiting with bated breath for yet more thousands of visitors to come and gape.  I realise I need more time.

The ideal thing would be to take one of those brightly-painted open-topped two-deck buses that you see from London to Beijing (interestingly, they are owned worldwide by a company based in UAE that also has worldwide rights to restaurants named for that wellknown jockey Frankie Dettori, who has been in a bit of bother with the racing authorities this week…) 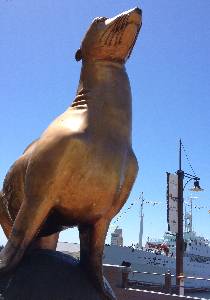 A golden sealion guards the outside terrace of the Table Bay

But this walk, as I pass quay four, and quay five, and quay six, takes me to Table Bay, the somewhat Disney-like luxury hotel that hosted those dancing musicians and the Leading hoteliers to a scrumptious brunch only a few days ago.

A golden sealion greets me first, and then there is Sherwin Banda.  I did not need to wait ten minutes.  The sun has shone nonstop.