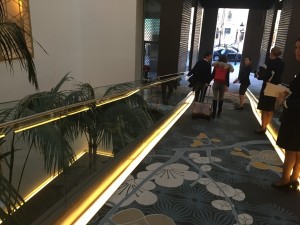 Enter, or leave, the hotel via a sloping catwalk

Barcelona is not only a food pinnacle of the world, it is fixated on ham. At every possible moment, ham appears. Looking back, the luxury Mandarin Oriental Barcelona hotel never missed an opportunity to show off its addictive hams (see above, a ham being carved-to-order at breakfast). This is the only hotel which the gal remembers entering via a catwalk. Yes, other hotels offer boat arrivals, and at Six Senses Zighy Bay you can paraglide in, and at the forthcoming Wynn Palace Macau you enter via gondolas. But here you walk up a sloping catwalk from Passeig de Gràcia, the stately home of best luxury brands. See the first video below. 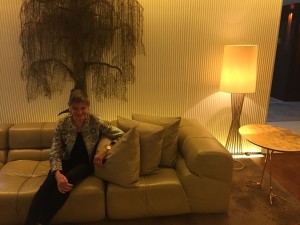 The golden, and intimate, lobby

At the top of the catwalk there is a warm but small lobby – proper sitting and gathering goes on in the adjacent Banker’s Bar, a reminder that this was formerly Banco Hispano Americano. Pass a Miu Miu vitrine, and the opening to Manolo Blahnik, to get to two sets of elevators. The knowledgeable take one of the 22 suites in the adjacent, but connected building, added in 2014 to give a total of 120 rooms in all. Patricia Urquiola‘s designs throughout mean some crinkly, screen-like walls, and superbly-smooth oak furniture, and bathroom lighting that is among the world’s best (added to this is the fact that the hotel works with anti-ageing consultant Dr Manuel Sánchez). The hotel is also lucky to have the world’s best aid to beautiful facial skin, the one and only Linda Meredith, who has trained the specialists here, at the six-room spa – try her oxygen facial, or, for the whole body, the spa’s Year of the Monkey treatment. 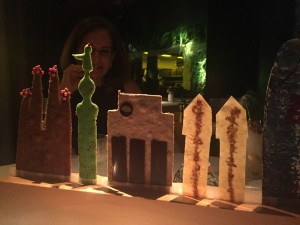 Edible skyline at the end of dinner

All this makes you feel, well, even younger. On the eternal youth side, some dishes are applauded by Dr Manuel Sánchez on the menu of MOments. This is a 50-seat theatre of a restaurant, with see-through kitchen. It is overseen by Carme Ruscalleda, the Iberian Peninsula’s best-known female chef –she has three Michelin stars for Sant Pau, near here, and another two for Sant Pau in Tokyo. Her son, Raül Balam, is permanently in the kitchen here and you need to book far far ahead for a table (you might, as we did, be sitting near football legend Lionel Messi). Let Manager Federico Fernandez plan your menu, which should definitely include a one-bite truffle croquette, and a signature ‘Maresme green caviar‘, which turns out to be sweetest of whole baby peas from the nearby Maresme area, served in a bowl with leeks, mint, and cubes of pork jowl, and a whole empty peapod as decoration. Whatever your chosen dessert, you will be brought what can only be described as an edible skyline to finish the meal. 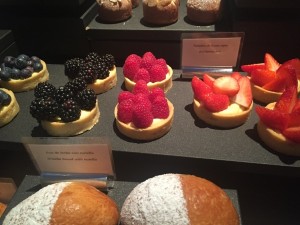 The breakfast buffet ranges from whole ham, above, to small fruit tarts

Hotel GM Greg Liddell says that in such a foodie centre as Barcelona the only way for a luxury hotel to compete with outside restaurants – those in the Adria empire, or tapas bars or basic Spanish eateries – is to think outside the box. At night, the bank’s former sunken banking hall, now called BistrEau, turns into a seafood celebration, overseen by Angel León, known as Chef of the Sea (try his 12-course tasting menus, with live guitarist some evenings). All day long, however, this is the consummate relaxed dining-lounging area. Some chairs are tall wicker, some are low couches, you choose. At breakfast, the dozens of well-labelled breads include a wine bread, and for those with a sweet tooth there are selections of tartlets (see the second video below). The knowledgeable, of course, head for the ham.