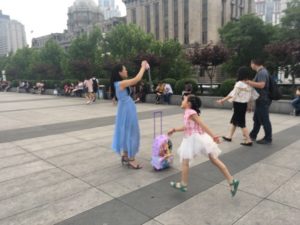 Everyone takes photos on The Bund

Shanghai’s The Bund is unique, and you can absorb all the atmosphere you want by merely getting out there, joining tourists from all over China who come to take selfies and buy souvenirs. There are stalls selling personalised T-shirts: they take your photo, with a background of Pudong skyscrapers across the Huangpu river, and instantly print that image on a right-sized T-shirt. Others sell drinks and, amazingly, everywhere is really pretty clean – someone has done an extremely good job in educating the public not to throw trash. Luxury hotels that are right on The Bund have a distinct advantage when it comes to attracting leisure business, says the gal, noting that over half of those staying at Waldorf Astoria Shanghai are now coming purely for pleasure, and the biggest number is domestic. 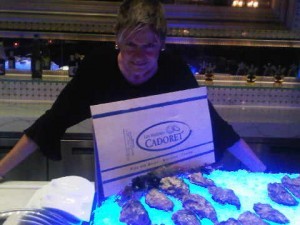 Oysters in the Long Bar

This is a clever hotel, marrying a 1910 historic building with, a hundred yards away, a 24-floor tower opening on to Sichuan Road, parallel to The Bund, that was built exactly a hundred years later. The 1910 original has variously, in its illustrious past, housed the Seamen’s Club, and the Shanghai Club, and also, less gloriously, China’s first KFC outlet. At some point, presumably not in the Colonel Sanders era, Chou en Lai and Nixon dined here. Anyway, it was expanded into a stately 273-room hotel, and opened September 2010. Just as with Palacio Duhau – Park Hyatt Buenos Aires, some customers like the old building, others prefer the new, looking back at the old. Here in Shanghai, choose a room in the new tower if you want the gym and pool, and access to the Waldorf Astoria Club, but definitely stay in the heritage building if you prefer to look out, through your easily-opened windows, at The Bund. 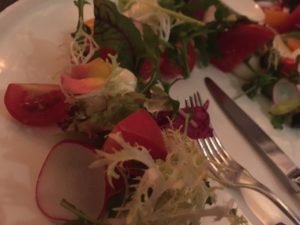 I was back in Suite 404, in the heritage building, and once again loved looking out at the action, from early-morning kite flying through to evening strollers. This is a great hotel for exercise fanatics, by the way. From The Bund it is 21 steps down-and-up to get to the hotel’s Bund-end lobby, and, for those who do not take one of the elevators, a further 96 original stairs up to the fourth floor. To reach the main lobby, in the modern tower, you need five minutes’ walk, with 15 new marble steps en route. The excellent concierges, who have double falls of ornamental gold chains on their Laurent Ginioux black jackets, are back in the modern-tower lobby. Want to eat? Main choices are back in the heritage building. 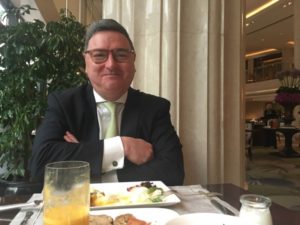 We had an early supper, that night, but then Chinese people dine so early that, were they sharing a hotel with Brazilians or bodies from Barcelona it would be a case of ne’er the twain would meet. They specialise in oysters in the Long Bar but the hotel’s GM, Rudy Oretti, who is remarkably good at anticipating what someone needs (he comes from a line of hoteliers) had also thoughtfully already ordered burrata and beetroot salads, with a side dish of absolutely addictive salt-free fries, and that, with a glass of Bourgogne Pinot Noir Louis Latour 2015, was a perfect start to an evening that went on to functions, and finished, back home in my four-poster bed in suite 404. If you want to see what it looks like, by the way, LOOK AT THE VIDEO BELOW.