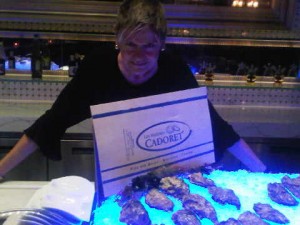 Oysters in the Waldorf Astoria Shanghai on The Bund's Long Bar

When you go down to the woods today you are in for a big surprise… when the gal goes in to the Shanghai Club, started in 1910 by Sir Warren Pelham, she is amazed. From The Bund – it is building Number Two – you go up seven original stone steps.  Nothing much.

Then you go up 14 old-carpet steps, and in front of you is this glorious, unfaded 102-year old elegance with masses of crystal chandeliers and polished marble and antique furnishings.  This is one of two lobbies of the super-luxury 273-room Waldorf Astoria Shanghai on The Bund. Turn left into the Long Bar, with its original 100-foot bar.  At one end there is an ice-filled oyster bar, ideal for a photo to set the picture. 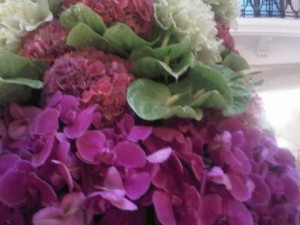 Detail of flower 'sculpture', one in both of the hotel's two lobbies

In the centre of The Bund lobby – and the other lobby, in the new 24-floor tower on the street parallel to The Bund, a good 150 yards’ internal walk – both lobbies boast (a word I use once in five years), they BOAST the most amazing, and identical, six foot tall flower sculptures.  The artist is local, and apparently even Thais, who do everything so beautifully, cry when they see these flowers.

There are more flowers strategically dotted around public areas.  Walk from The Bund lobby through its concierge area and down 15 new-marble steps to the colonnade that takes you eventually to the ‘new’ lobby.  There are more flowers, and classical music.  Hanging down through what is a stairwell to the open-topped lower-floor restaurant is a classical chandelier, a magnificent waterfall of crystal that reminds me of some of Jumeirah Etihad Towers’ chandeliers, in Abu Dhabi. 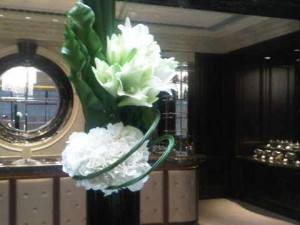 Another floral sculpture, in the colonnade linking the two lobbies

We dined in Pelham’s, named for Sir Warren and designed by David Rockwell.  Behind a glass wall at one end the kitchen is at full throttle. The ceiling is decorated with over a thousand coins.

In a private room behind ceiling-high walls of wine bottles and glasses actually taken down for use, as necessary, sat China’s all-time giant basketball star Yao Ming, who was last ‘seen’ sharing a billboard in Beijing with Kate Winslet.

Cannot see what he is eating but it is obviously not shark’s fin, which he is so successfully campaigning against that a wedding for 400 last weekend switched its menu.  At the next table-of-ten to us sits Tonino Lamborghini, designer, and son of the iconic marque’s founder Ferruccio Lamborghini.

Our table-of-four includes three of the most interesting men in the 50-seat restaurant, Philippe from St-Tropez, Simeon from Melbourne and Tim from the home of grass tennis, Wimbledon.

Sommelier Tansy, from New York on steroids, also known as Shanghai, gives one of the most thoughtful wine suggestions we remember (as a 21-year old he was introduced to Penfolds’ Grange and that was ‘that’).  The chef is French, the food New York-modern, and colourful. 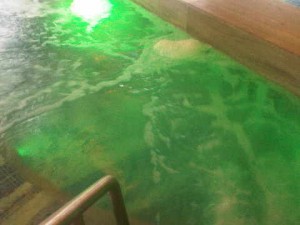 Colour abounds in life today. This morning, after last night, I head outside to run-the-Bund, and then inside to the spa. The indoor pool unusually has a really-hot adjacent hot tub, which changes colour every minute.  On my way out the young attendant offers me a green apple.

Later, down at the lowest-level breakfast room, I am thrilled that the hotel still has its almost-black pumpernickel bread, as well as fried dough sticks, and deep-fried rhubarb tarts for the locals, who are also offered a traditional Shanghainese meal, with wonton soup.

For health addicts, the selection includes a detox juice (cucumber, beetroot, apple and lime juice), a power-vita mix (carrots, green apple, orange and ginger) and a berry smoothie, with apples, honey and yoghurt. 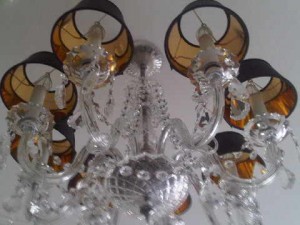 Look up at the bedroom ceiling's chandelier

Room 2309, in the new block, is absolutely lovely, with hues of palest champagne, gold and teal, and perfectly blending damasks and, in both bed and sitting rooms, crystal falls hanging from gold-lined black-shade chandeliers.

The bedlinens are Swiss, the toiletries are Italian (Salvatore Ferragamo’s Tuscan Soil) and the view, across the Bund, the Huangpu River and its busy traffic, is – Pudong.  As I pack I think of another party that the hotel hosted, on Monday this very week….

Hilton China, which has 28 hotels, sponsors the China Olympic Committee. All hotels were invited to nominate one-to-watch young Chinese.

Hilton Stars entrants, and their mentors, Waldorf Astoria on The Bund, June 4th, 2012

Twenty-seven hotels took part. They each made a video featuring their chosen youngster’s thoughts on why he/she should go to London as a Hilton ambassador. All 27 were flown to a grand Stars in London Awards reception here, at this luxury hotel, June 4th, 2012.

Hosts were Hilton area President Martin Rinck, Hilton China boss Tim Soper and this luxury hotel’s boss Simeon Olle. I am told that one young woman had only flown once before, another had only once been outside her birth province, and some of them wore the most beautiful gowns.  All got a certificate.

The four men and four women who won have to rush around (some have never had passports). They will fly to London with the China Olympic Committee team.  Yes, there will be time for sightseeing and shopping but they will also be concierges at China House, the national pavilion during the games – for which they have several tickets, including the opening ceremony, which is being produced by Danny Boyle, of Slum Dog Millionaire fame.

All those really-young people must have felt like true millionaires as they left the Waldorf Astoria (where else do butlers wear jackets with not one but two retaining chains, and where else has flowers like these?).  As Simeon Olle says, his personal goal is to make this one of the truly iconic hotels – of the world.